A bee ally is born

Miller first became interested in honey bees when she was 10. She heard her mom talking about how bees were disappearing and became concerned.

“I remember being incredibly worried, because she said most ice cream flavors would be gone along with their disappearance,” said Miller, referring to the vital role bees play in agriculture through the pollination of about 100 crops, including strawberries, raspberries, blueberries, cherries, pears, apples, cranberries and almonds.

About the same time, Miller had a school assignment to create a presentation on the topic of her choice. She chose to research honey bees and CCD. What she learned was far more disturbing than the disappearance of ice cream flavors, she said.

“I read Albert Einstein’s foreboding quote about how if bees were to disappear, mankind would have but four years to live,” Miller said. “Although I learned that this may not necessarily be true, I was still intrigued and concerned.” 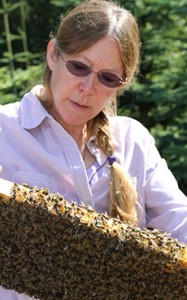 Energized by this new knowledge, Miller decided to help. She held her first fundraiser at age 10 and has made donations to bee research every year since. This year she organized and hosted a lecture for local honey bee enthusiasts and concerned citizens. The featured speaker was Sue Cobey, a WSU bee breeder-geneticist who Miller supported previously at the University of California, Davis.

“Sue was kind enough to come to Mill Valley to talk about her work with honey bees,” said Miller. “She really did an amazing job and continues to do amazing work each and every day.”

Miller’s parents are proud of their daughter’s commitment to the cause and her fundraising skills. Her father, Craig, describes Miller’s accomplishments as “remarkable.”

For this year’s fundraiser, she rented a clubhouse from the city of Mill Valley, got facility administrators to waive their insurance and down payment requirements, secured sponsors to pay for food and beverages and publicized the event. She also enlisted Cobey, who agreed to fly down and speak for more than two hours.

At the event, Miller sold hand-rolled beeswax candles, booklets about honey bees and raffle tickets for a donated gift basket.

“Sheridan cares so much about people and the earth,” said her father. “We are amazed at her energy level and the fact that, instead of burning out, she seems to be getting even more committed to her efforts. She often tells us of her next idea where she hopes to raise even more money than the last time.”

Miller first met Cobey at UC Davis in 2009. Cobey was manager of the Harry H. Laidlaw Jr. Honey Bee Research Facility (http://beebiology.ucdavis.edu/), the largest and most comprehensive state-supported apiculture facility in North America. She gave Miller and her family a tour of the bee lab, with the goal to “enamor them with the bees and show what can be done,” said Cobey.

“Sheridan was excited about the breeding program we were working on as one piece of the puzzle in dealing with the collapse of colonies,” Cobey said. “She wanted to support this.”

After that first meeting, Miller kept in touch with Cobey, writing and asking questions. When Cobey came to work for WSU, Miller’s interest and donations followed.

“Sue has been generous with her time and her gratitude toward Sheridan,” said Craig. “She has instilled confidence in Sheridan and an incredible sense of pride.

“I guess an organization could simply send a thank-you note for a donation,” he said. “Sue, on the other hand, sent friendship, knowledge, encouragement – and even bees!”

Beekeepers first sounded the alarm about CCD when entire apiaries of bees began disappearing circa 2006. Researchers now believe that CCD may be caused by a variety and combination of factors, including pesticides, parasitic mites, pathogens, viruses and malnutrition resulting from the declining diversity and abundance of flowers.

The Natural Resources Defense Council estimates that nearly one-third of all honey bee colonies in the country die annually.

Miller’s donations, along with other funding, support Cobey, who is working with Steve Sheppard, chair of the WSU Department of Entomology (http://entomology.wsu.edu/), to establish the first genetic repository of honey bee semen in the world. The project’s goal is to preserve and increase genetic diversity known to increase honey bee fitness and the ability to better cope with environmental challenges.

“Our project at WSU includes the importation of honey bee germplasm for breeding purposes in collaboration with U.S. honey bee queen producers who supply stock to beekeepers nationwide,” said Cobey.

Restrictions on honey bee importation into the United States have been in place since 1922 in an effort to protect domestic bees from imported mites and other dangers. The restrictions have resulted in a limited gene pool for U.S. honey bees.

“A million-and-a-half queens are commercially produced annually to supply the industry. These are descended from about 500 queen mothers – a relatively small number,” said Cobey.

Recent improvements in technology have made it possible for Cobey and fellow researchers to collect and successfully preserve honey bee semen. Germplasm imported from several races of honey bees in Europe is being crossed with domestic breeding stocks to create healthier, more robust bees.

The outlook from a budding beekeeper

Miller’s passion for helping honey bees has led her to become a backyard beekeeper. Cobey set her up with her first hives.

“It’s been quite the experience, and I mean that in the best way,” said Miller. “Bees are such fascinating creatures; we as people can learn so much from the way they live.”

She offers the following tip for new beekeepers: “Don’t be tentative,” she said. “I was incredibly tentative the first few times around the hive, and it just holds you back from learning as much as you can about these insects.”

While Miller isn’t sure what she wants to be when she grows up, she will always maintain her love of bees.

“I want to continue in the field of science, whether that is in honey bee research or in the medical field,” Miller said. “I have so many things I want to pursue, and I am very excited to have fun learning where my biggest passions lie.

“I always want to be a backyard beekeeper, though,” she added. “I really sympathize with these tiny creatures’ plight and see them as ‘a canary in a coal mine’ for our somewhat ailing world.”

What advice does Miller have for others who are concerned about problems in the world?

“Honestly, and I know this sounds cliché, but every little bit counts,” she said. “CCD is an incredibly terrifying prospect … but it will only continue to keep getting worse if we just sit on the sidelines and let it happen.

“I have only made a tiny impact,” she said, “but if everyone made just as tiny an impact with this issue, or with other huge issues in the world, we would have 7 billion people making a gigantic impact – together.”