SPOKANE, Wash. – If there’s one thing this winter has demonstrated, it’s that the weather can still turn very cold and snowy in our region.

Frigid temperatures, lots of snowfall and occasional gusts of wind have left landscapes rippled by snowdrifts. The Inland Northwest looks – and feels – more like the Midwest.

Temperatures not felt since 2008 have struck central and eastern Washington in two waves since early December. Considering how mild our last two winters were, the cold has hit many people with a jolt.

Our first big freeze swooped in on Dec. 6, not peaking until Dec. 17 when Spokane International Airport recorded a low of minus 4 degrees. That temperature was 22 degrees colder than normal.

Our second big freeze descended on New Year’s Day, when unusually cold, dry winds drove temperatures to as low as minus 3 in Spokane and minus 6 in Moses Lake and Colville, Wash. On Jan. 3, the National Weather Service even issued a wind chill advisory. These wintertime alerts are common in places like Minneapolis, Chicago and Fargo, N.D., but not in our part of the country.

And then there’s the snow. If our knuckles aren’t white from shoveling, they may be from driving. With three substantial snowfalls since early December, road travel has been challenging. In the Spokane area last Sunday, several inches of snow mixed with freezing rain caused numerous road slide-offs, according to Washington state troopers.

The wintry weather also forced a number of school districts from Spokane to Coeur d’ Alene, Idaho, to cancel classes or delay their start by two hours on Monday.

So what’s behind our Midwestern weather conditions? 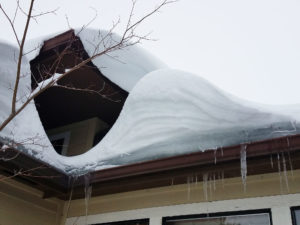 Partly to blame is La Nina, the flip side of El Nino. Marked by the presence of cool surface waters in the equatorial Pacific Ocean, La Nina typically brings more precipitation and colder temperatures to the Pacific Northwest and other northern states.

Also responsible are two fronts of cold Arctic air that arched southward through Canada and into our region.

It’s looks as though we’ll have to put up with a few more days of North Dakota-like weather. Then, if temperatures warm up next week as predicted, maybe all of those out-of-place looking snow drifts will melt.