PULLMAN, Wash. – The published works of Washington State University authors will be recognized at the second annual “Crimson Reads: A Celebration of WSU Authors,” at 3:30 p.m. Tuesday, March 24, in the Terrell Library atrium. Crimson Reads is part of WSU Showcase, the annual celebration of faculty, staff and student excellence.

“Crimson Reads publicly acknowledges and honors our faculty, students, staff, alumni and retired university community members who have authored, co-authored or edited a book, including e-books, within the past year,” said Chelsea Leachman, co-organizer with WSU Libraries’ Lara Cummings and Erica Nicol. “The event is an opportunity to create a greater awareness of the diverse publishing activity and achievements of WSU authors.”

Refreshments will be offered during a reception open to the public. For more about Crimson Reads, including the full book list, visit http://libguides.wsulibs.wsu.edu/crimsonreads.

Can’t be there? Then enjoy the sampling of selections that follows.

Every bone-crushing tackle the 20-year gridiron veteran withstands is a painful reminder that he’s not as quick or strong as he once was. The C word keeps surfacing with every hit to the head. Worse, the second-string quarterback, Hunter Williams, is attracting favorable team and media notice. 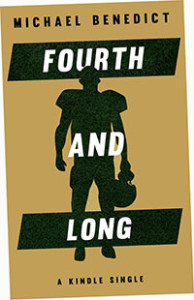 A reader might be more sympathetic toward Thomas if he weren’t so unlikable. He’s arrogant. Women are in his life to adore him. The only treatment he wants from the team doctor is a green light to play. But a new doctor for the Gladiators -a woman named Samantha – isn’t going along with Thomas’s game plan. Her atypical rejection of him ultimately frees Thomas to confess his fears to her:

“‘…I’ll play until I’m forty. If I’m lucky. Then I’ve got half my life left, and what the hell happens?…This is the only thing I know how to do. What would you do – if you had to stop being a doctor when you were forty?’”

Benedict, an administrative assistant in the WSU Office of Undergraduate Research, said watching Brett Favre’s final season with the Minnesota Vikings became the seed around which he wrote “Fourth and Long.” He wanted to explore why a player like Favre would continue to go out on the field, “getting beaten into the turf, over and over again, with no apparent reward for it, no reason to keep doing it that I could understand…

“I do think many athletes are like Don in some ways, and that many of the rest of us are too,” Benedict said. “I hope the story has that ‘what’s most personal is most universal’ effect. Eventually we’ll all have to stop doing the things we love…

“I suppose I’m also trying to reveal something about the ‘character’ of professional athletics, this huge and out-of-control monster we’ve created,” Benedict added. “Comparing professional athletics today to what it was even 40 or 50 years ago, when an athlete didn’t really make much more than other professionals, is pretty remarkable. Now we have these leagues where there’s such a ridiculous amount of money involved that the stakes are just astronomical.”

How did the American missionary movement take hold in the Hawaiian Islands by the mid-19th century? WSU associate professor of history Jennifer Thigpen suggests that the key lies in the relationship between Hawaiian and American women in “Island Queens and Mission Wives : How Gender and Empire Remade Hawai‘i’s Pacific World” (March 2014, University of North Carolina Press).

The first group of American missionaries arrived at the islands in spring 1820, eager to bring Christianity to the natives of Hawai‘i. They faced a rude awakening, finding disinterested potential converts; stiff competition from other global visitors vying for political, economic and religious gain; and a powerful female co-ruler, Ka‘ahumanu, favored wife of the recently deceased King Kamehameha.

Only when missionary wives and high-ranking Hawaiian women developed closer relationships, initially started through the giving and receiving of gifts, did the mission start to see results. 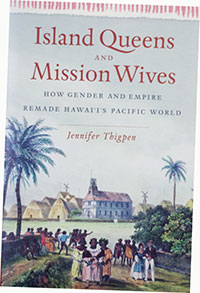 “I argue that the Hawaiian and American missionary women who came into close and sustained contact with one another in mid-19th century Hawaii shaped the direction of the mission and the fate of the islands,” Thigpen wrote. “Indeed, women stood at the very center of the Hawaiian-missionary drama.

“Hawai‘i’s royal women, in fact, virtually compelled mission wives to participate actively in the mission,” she added. “Despite missionary notions about women’s ‘place’ in the mission, my research reveals that mission wives came to play a central role in sustaining critical diplomatic relations with some of the island’s most powerful rulers, including queens and other women of rank.”

After a few short years of the missionaries’ presence on the islands, the Hawaiian ruling class (ali‘i) adopted and implemented laws based upon the Ten Commandments, radically and permanently altering public and private life, according to Thigpen. Missionaries also became increasingly entrenched in Hawaiian politics.

“Some missionaries benefitted personally from the relationships they established with ali‘i,” Thigpen said. “Moreover, those relationships ultimately created a space for the colonization of the islands. In Hawai‘i, there is an often-repeated adage that the missionaries ‘came to do good and stayed to do better.’ Not surprisingly, there is a lot of resentment about that.”

While Thigpen was conducting research in Honolulu, she was struck by the city’s multicultural character, a blending of Hawaiian and American influences.

“In terms of the mission’s legacy, it’s interesting that the mission imprint can still be felt in the city itself, yet it does not dominate,” she said. “In the downtown, streets named to reference Hawai‘i’s royal and cultural past are intersected by streets named after missionaries. The original mission house still stands, as does the church that missionaries built. ‘Iolani Palace is just a very short walk away.

“I look at this as an illustration of cultural persistence and as a metaphor for the way that Hawaiian and American culture coexist there,” Thigpen added. “We know that Hawaiians lost a great deal as a result of foreign intervention; nevertheless, Hawaiian culture remains as a vital presence there. This is hopeful and speaks volumes about the strength of Hawaiian culture.”

‘On Grief, Hope and Motorcycles’

Candiya Mann, senior research manager in the WSU Social and Economic Sciences Research Center in Bremerton, Wash., was devastated by the death of her boyfriend, Mike Bartlett, in 2012 – one day after his return from his final deployment in the U.S. Navy – during an annual motorcycle trip with friends.

Six months later, she started “On Grief, Hope and Motorcycles: A Diary” (December 2014, self-published and available through Amazon), a yearlong recording of her journey back to life, the significant part of which she spent on the back of her own motorcycle.

Mann’s 71 blog posts and ride reports reveal a deeply personal, sometimes raw search to find meaning in her overwhelming grief. Mann brings the reader along for the ride with unflinching honesty, sharing all the details of numbness, horror, absurdity, desperation, revelation and fear as she takes tentative steps to move forward. 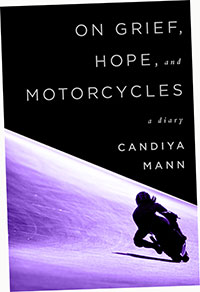 Early on, Mann describes “feeling like a cornhusk vibrating: an empty, dry, fragile shell, shaking in rhythm with the oscillations of a keening wail that only I could hear. A cloud of panic floated over my shoulder, ready to descend with a moment’s relaxation of vigilance. I had to be careful not to think too much and, most especially, not to think of the future. That would invite the panic to descend.”

But Mann recalls the joy of “riding two-up” behind Bartlett and then learning to ride herself. At the time of Bartlett’s death, Mann was a relative novice, anxious and unsure of her motorcycling skills. So 10 months later, she goes to the intensive Yamaha Champions Motorcycle School in Utah both as a way to honor Bartlett and to challenge herself.

By the end of her year-and-a-half-long journey, Mann has undertaken a memorial ride with Bartlett’s biking friends, her first solo trip from Bremerton to California and a riding trip in Mexico. She traveled some 4,500 miles, following the constantly unfolding ribbon of highway to cities and wilderness she had never been to; learning to plan the trip but to take the occasional spontaneous detour; enjoying the deference and admiration paid to a woman solo rider; and meeting other members of “the far-flung family of motorcyclists,” as she calls them.

“The urge to journey, to quest, to find some sort of redemption or resolution or peace…must be universal,” Mann wrote. “Historically, the bereaved have journeyed solo to the mountains, the desert and the sea. They have walked, cycled, backpacked…and motorcycled.”

Today, Mann said she has a greater sense of peace and happiness and more distance from the raw emotion she felt after Bartlett’s death. Readers of her diary have also shared stories of their own losses and journeys.

“I have become more open to joy and to life moving forward,” she said. “In some ways, I think traversing the depths of grief has given me a deeper appreciation for the simplest joys. I take immense pleasure from the simplest things.”