PULLMAN, Wash. – The flashing VCR clock—00:00, 00:00, 00:00—was once as ubiquitous as the response: Let a teenager fix it. While the belief that young people are more adept at technology—how do they text and walk at the same time?—is not baseless, it is often overinflated.

Case in point: Classroom technology at Washington State University. Four WSU faculty members recently led a workshop on using new tools to engage students. Two of them, communication professors Rebecca Cooney and Brett Atwood, were comparative youngsters; each looked able to program an interactive whiteboard while windsurfing. The other two presenters may have predated the overhead projector.

The first speaker, Richard Zollars, associate director and professor in the Voiland School of Chemical Engineering and Bioengineering, has been a professor for 37 years. He has seven times been named to the WSU list of Outstanding Teaching Faculty.

Zollars began by giving out clickers—more like a small remote control than a castanet. He showed a slide with a tricky question about the mass of gas and asked people to push the button representing one of four answers. He then tracked the results or, as he put it, “probed for misconceptions.”

Clickers help keep the video-game generation engaged, he said, and reduce the embarrassment associated with raising one’s hand—a side benefit for which the audience seemed grateful. Most importantly, more engagement means more success. 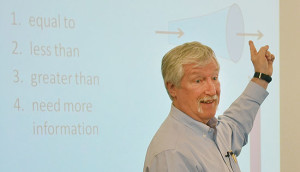 When Zollars started teaching his introductory course, about a third of the students usually didn’t get the minimum C required to pass. After he introduced new techniques, the no-pass rate was cut in half.

The changes have also affected his enjoyment: “After 30-plus years of standing in front of a classroom talking, you get tired of listening to yourself speak,” he said. “Turning the tables and having the students do more is a nice break.”

Cooney came next and discussed Screencast-o-matic and VoiceThread. The first lets you capture whatever’s on your monitor, combine it with voice and webcam recordings and put it online.

The second is like a chat area but includes audio and video—such as her screen captures—making it a great access center for course materials.

Appealing to the video generation

Business faculty member Jan Koal, who has been teaching since the Nixon presidency, described YouCam 6, which adds video and audio to PowerPoint slides. Koal has a homemade green screen in his basement so he can add custom backgrounds to his YouCam 6 videos, such as live palm-tree shots from a Costa Rica webcam. He then posts the videos on YouTube and links to them from Angel.

The videos are an attention getter, he said. If he simply talks, some students seem distracted. Last semester, he happened to play a video of himself talking.

“It was eerie,” he said. “Every eye in the room was riveted on the screen. I don’t get that kind of attention when I’m live.”

Atwood explained SoundCloud, Screenr and Narrable, then finished with a leap into the future: Oculus Rift, a virtual reality headset that changes the view when you move your head. It’s like having a 360-degree IMAX theater strapped to your face – and equally attractive.

While virtual reality technology is in its infancy, Atwood said, it has incredible potential.

“All sorts of amazing things are possible with these sorts of virtual reality headsets,” he said, including giving students virtual views of science, engineering and history.

Workshop attendee Raymond M. Quock has been a professor for 40 years. He was previously Allen I. White Professor and chair of WSU’s Pharmaceutical Sciences Department. He was named to the WSU President’s Teaching Academy in 2004, has earned 14 other teaching awards and recently moved to the psychology department.

In sum, he’s a proven master of his profession. Why did he attend the workshop? Because he intends to stay that way.

“I’m here to learn about all the tools in the toolbox that we can use for teaching,” he said.

For a printable summary of all the tech tools mentioned here, please select this link. For a list of future WSU workshops, including ones on VoiceThread and flipped classrooms, please go to the Global Campus’ eLearning Service page.