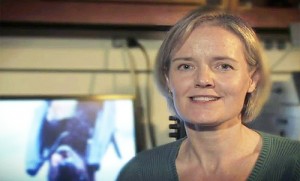 “Because neurons at different levels of the auditory system respond selectively to particular types of vocalizations, we are able to discriminate syllables, words and sentences as well as different voices,” she said. “We are studying how neurons in different areas make that possible.”

The NIH grant is particularly meaningful in light of the university’s research mission, Portfors said, because it is designed to help provide research opportunities for students and strengthen WSU Vancouver’s research environment.

Although WSU Vancouver has a history of receiving some NIH grants, this is the first Academic Research Enhancement Award on the campus. These awards are given to support biomedical and behavioral sciences at educational institutions that are not major recipients of NIH grants. The funds will support jobs for students who work in the lab and help them gain a variety of research experiences to further their education as scientists.

While the NIH grant examines auditory processing at low levels of the system in the brainstem, the NSF grant focuses on a higher region of the brain, the auditory midbrain, and includes a mathematical modeling component that may prove especially useful in development of devices to help people who are hearing-impaired.

NIH is a part of the U.S. Department of Heath and Human Services and is the nation’s medical research agency. It is the largest source of funding for medical research in the world. The National Science Foundation is a U.S. government agency that supports research and education in the fields of science and engineering.