SEATTLE – “Lightning in a bottle” is how venture capitalist Joe Piper describes much of the innovation originating at Washington State University. It is elusive, powerful, brilliant – and captured to be shared with the world.

Piper was one of 300 investors, entrepreneurs and others demonstrating their interest at the recent WSUi3 expo highlighting the intersection of WSU research and industry partnership.

“Coming to an event like this, I realize there is more we in Seattle could be doing with WSU,” Piper said. “WSU has a more generous economic model because they truly want to get the technology out to benefit society.”

“I love working with WSU because the people there really like to get things done,” agreed Mickey Blake, an entrepreneur from Everett, Wash. She is working with Karl Englund and the WSU Composite Materials and Engineering Center to develop and commercialize a green, zero-waste alternative to polystyrene foam used by the floral industry.

Piper was excited about the possibilities of an environmentally friendly, biodegradable hydraulic fluid presented by Santanu Chaudhuri from WSU’s Applied Sciences Lab. The vegetable oil-based lubricant is designed for use in sensitive environments like dams where it can protect instruments from the elements without harming migrating salmon.

“We think the university has a lot to contribute in innovation and to the economy,” said Anson Fatland, director of WSU’s Office of Economic Development based in Seattle. “We wanted to bring those ideas to Seattle so people could interact with them in person.”

The day after the event, he already had three or four WSU researchers asking to be included in next year’s expo. 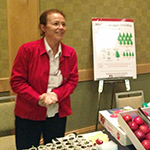 Among the research innovations that expo participants could investigate were:

* pharmaceuticals that rebuild connections in the brain for treating Parkinson’s and Alzheimer’s diseases;

* intrusion detection software that identifies power grid hackers before they can cause problems;

* motion sensor technology to help the elderly live in their homes longer;

“WSU does more with less than any other university in the country,” Piper said. “With the innovations coming out of WSU, I can see there’s usually lightning in the bottle.”

The expo is part of Fatland’s effort to better steer research toward commercialization.

“We’ve doubled down our efforts to focus on industry relations, including increasing WSU’s presence on the west side,” he said. “We’re being more proactive and engaging in the commercialization and intellectual property process. These changes have generated excitement among faculty.”

Students also are benefiting from the shift; there is a focus on making them competitive and industry-ready.

“You might like the technology we offer but without the workforce to support it you won’t be successful,” Fatland said. “We can provide you with students trained to help.”

In July, WSU established an Office of Commercialization, folding in functions of the WSU Research Foundation and Office of Intellectual Property Administration.

To facilitate collaboration and information sharing the Office of Economic Development now serves as the umbrella for the Office of Commercialization, Industry Relations, Corporate and Foundation Relations and the Small Business and Development Centers located throughout the state.

What’s next for the Office of Economic Development? Perhaps a name change.

“Economic development is often seen as fundraising and we do so much more,” Fatland said.

In the meantime, interested investors and entrepreneurs can count on WSU’s reputation for service: “We’ll return your phone call; we’ll meet with you,” he said. “We want to work with you.”

Dogan Gursoy, Kris Kowdley, Dan “Annie” Du, Yuehe Lin, and Nathan McDowell are on this year’s list recognizing researchers whose publications rank among the top 1% most cited in the world.