The projects will be implemented in two different communities in Uganda this June by Scott Hudson, WSU Tri-Cities professor of electrical engineering, who also funded the projects on behalf of The Giving Circle. The Giving Circle is an all-volunteer, nonprofit organization based in Saratoga Springs, N.Y.

The projects are part of the students’ capstone engineering courses at WSU Tri-Cities. The technologies were designed to be easily replicated and maintained in various communities in Uganda at low cost. Hudson and Messiha Saad, clinical assistant professor of mechanical engineering, advised the student teams.

In addition to installing the different devices within their respective communities, Hudson said his goal will be to meet with representatives of the Ugandan government, representatives from Ugandan universities, as well as other influential figures to see how they can spread their work to other regions and villages. 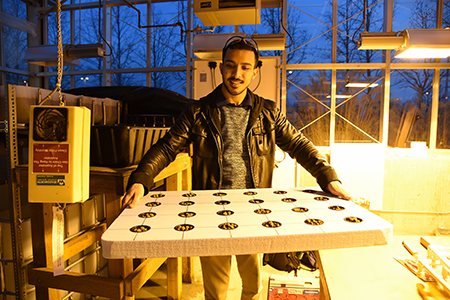 An electrical engineering team designed an aquaponic system that incorporates minimal water, fish and a growing medium to produce a recyclable and sustainable agricultural system. The team is composed of students Amjad Al-Shakarji, Gabriel Fuentes, Trevin Schafer and Daniel Cain.

The apparatus will be implemented in the Kagoma Gate Village in Uganda, where many people don’t have access to their own farmland, or can’t afford it, and water is in limited supply.

In the students’ aquaponic system, plants are planted in clay pellets atop the apparatus, where water is circulated to the plants via a solar-powered pump. Tilapia fish live in a water tank below and their waste is distributed to fertilize the plants growing at the top of the apparatus. The fish then double as a food supply source, as they are native to Uganda and are easily bred. 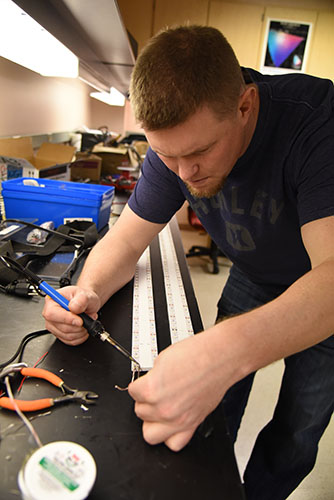 An electrical engineering team designed a solar lighting system that will provide the same amount of light as a standard U.S. office building and has the capability to store enough energy for at least two hours of light per night. The team is composed of students Pierce Jones, Daniel Deaton, Steven Goulet and Richard Dempsey.

The system also will be implemented in the Kagoma Gate Village in Uganda where the community has no access to electricity, which limits the number of hours that are available for educational instruction and other activities.

“Right now, the villagers are using kerosene lanterns, which are not only very dangerous, but also very expensive,” Hudson said. “When you think about the fact that these people are making an average of $1 a day, that can eat significantly into the family’s budget.” 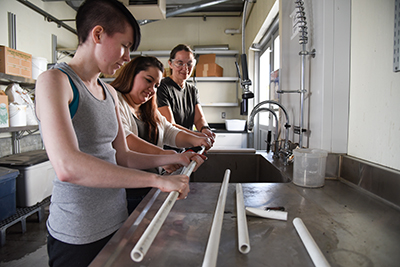 A mechanical engineering team designed a mushroom dryer that will allow for villagers in the Wakiso District of Uganda to dry and thereby increase the shelf life of the oyster mushroom. The crop is considered a delicacy in Africa and a local source of jobs and income in the Panache Cooperative region.

The team, composed of students Sam Sparks, Rachel Estes, Keenan Moll, Ian Pierce, Lorraine Seymour and Joel Larson, had to reinvent the traditional commercially available dehydrators, which require significant electrical power that is not available in the Wakiso District.

“The biggest challenge we’ve had to deal with is getting a mushroom, which consists of 90 percent water, down to 20 percent while dealing with the Ugandan climate that consists of about 70 percent humidity year-round,” Pierce said.

To combat that issue, the team created a device that utilizes a Lexan polycarbonate top that allows for the air to absorb solar energy and be superheated within the system. The system then uses solar components to promote air flow to help regulate the temperature, which ensures that the mushrooms don’t cook, and in turn, lose nutrients.

“The people in the Wakiso District will be able to use the dryers to dry their mushrooms and sell them as a local product to restaurants and other businesses, which will help them earn a greater living,” Seymour said. “I feel very rewarded to have participated on this project, because we’re creating something that will have a lasting value.”