What did the tree say after a long winter? What a re-leaf …

SPOKANE, Wash. – Never mind that March was among the wettest on record for the Inland Northwest. Our miserable winter is what still stands out. Just talking about it elicits grimaces and head shakes.

The only region in the U.S. where temperatures were colder than normal is the Pacific Northwest. The three cold spells that clobbered central and eastern Washington – the first in early December and two more during the first half of January – gave us a jolt, to be sure.

But three waves of subzero temperatures is only one reason that our winter was rough. Let us count the other ways:

Lots of snow: While it made for an outstanding ski season, the snow weighed heavily on nerves and rooftops. A total of 61 inches fell December-February, compared to the 42.6-inch long-term average. That’s 18.4 more inches than we’re used to shoveling.

Cold arctic winds: Unusual wind gusts from the northeast resulted in deep snow drifts more commonly seen in North Dakota. At one point, blowing and drifting snow forced the closure of Interstate 90 in two locations, along with school closures and delays. On Jan. 3, the National Weather Service issued a wind chill advisory – an ordinary wintertime alert in places like Minneapolis, Fargo and Chicago, but not here. 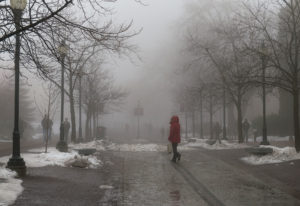 Fog: Periods of fog heavy enough to reduce visibility to a quarter-mile or less occurred on 34 days. Dense blankets of gray made of condensed water droplets suspended in the air were formed on land, as compared to rolling in off the Pacific Ocean. On several occasions the fog froze, not only decreasing visibility but causing slick roads – a bad mix.

Gloomy: Even by winter standards, we were cloaked in cloud cover a great deal. Consider that we saw only two clear days during December and January – one each month.

So if you felt like Dick or Debbie Downer this winter, it’s OK to blame the weather.

On the bright side, the mercury on the thermometer outside your kitchen window is rising weekly and the sun’s light is becoming more frequent and direct. Before long, we’ll be awash in color. And, perhaps, pollen.