PULLMAN, Wash. – Physicians and veterinarians alike will convene in Seattle for a conference Nov. 1 to discuss, among other things … penguins.

Cute as they are, waddling on short stubby legs and zipping through water, zoo penguins are susceptible to a disease that also sickens humans: West Nile virus.

At the Zoobiquity Conference, sponsored in part by Washington State University’s College of Veterinary Medicine and Paul G. Allen School for Global Animal Health, veterinary and human medicine experts will address this and other ways that animal and human health are interconnected: Asthma, domestic violence, obesity and air pollution will be explored.

There’s a lot to be learned by looking through the lens of veterinary biology, said Bryan Slinker, dean of WSU’s veterinary college. After all, animals, like humans, get cancer, diabetes, heart disease and arthritis.

And that’s only a handful of the ailments shared. Some are zoonotic infectious diseases transmitted from animals to humans, including influenza and West Nile virus.

“There’s this perception that humans have their diseases and animals have theirs. But the truth is, there are vast similarities both physiological and genetic,” said Slinker.

West Nile virus can sicken feathery critters such as crows, penguins and flamingos, but also people. In 1999, these birds provided early warnings that an unusual infectious disease was circulating in New York City – and it was a veterinary pathologist who sounded the alarm.

The Bronx Zoo veterinarian doggedly insisted that the mysterious pathogen killing birds at the zoo was the same one making humans sick in the city. Eventually, it was determined that West Nile – a virus never before detected in the Western Hemisphere – had landed in the United States.

Slinker serves of the board of Seattle’s Woodland Park Zoo, where medical “rounds” will be conducted during the afternoon portion of the one-day conference. Not surprisingly, a “penguins as sentinels for West Nile virus” presentation will be held at the exhibit housing Humboldt penguins.

During the conference’s morning segment at the University of Washington, pairs composed of one physician and one veterinarian will present joint perspectives on these case studies: obesity in a man and his dog; domestic abuse in a child and a cat; and air pollution affecting a child and a calf.

“I have been promoting the many ways we can foster a stronger connection between animal and human medicine and public health to improve the health of both species,” said Slinker, who received his veterinary degree from WSU 34 years ago. “By this I do not mean lab animal-based studies. Rather, I’m talking about naturally occurring conditions and disease processes.”

Based on a best-seller

The term zoobiquity comes from Barbara Natterson-Horowitz, cardiologist at UCLA’s David Geffen School of Medicine, who wrote the 2012 best-selling book, “Zoobiquity: What Animals Can Teach us about Health and the Science of Healing,” coauthored by science writer Kathryn Bowers. 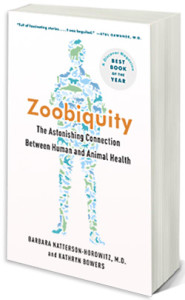 “Most physicians go through their entire careers without interacting with veterinarians, at least not professionally. Zoobiquity conferences aim to change this,” said Natterson-Horowitz in a telephone interview. “The idea is to get physicians and veterinarians to engage in conversations that could lead to new ways to diagnose and treat many kinds of conditions and diseases.”

The melding of disciplines in Seattle will mark the fourth Zoobiquity Conference, each one in a different part of the country. The Northwest gathering is put on collaboratively by WSU, UW’s schools of medicine and public health, Woodland Park Zoo and the Zoobiquity Research Initiative based at UCLA.

For more information on Zoobiquity Conference 2014, go to http://zoobiquity.com/.