PULLMAN, Wash. – Ernest Cline, screenwriter and author of “Ready Player One,” will give the 11th annual Common Reading Invited Lecture, 7 p.m. Monday, Aug. 28, in Beasley Coliseum on the WSU Pullman campus, with streaming to other WSU campuses statewide.

Cline wrote the 2011 sci-fi dystopian novel “Ready Player One,” which was selected in March by WSU as its 2017-18 common reading book of the year. The book will be read by thousands of first-year students across five WSU campuses in Pullman, Spokane, Tri-Cities, Everett and the university’s online Global Campus. The common reading book is often utilized and discussed in numerous classes, including English, literature, history and other general education UCORE classes. 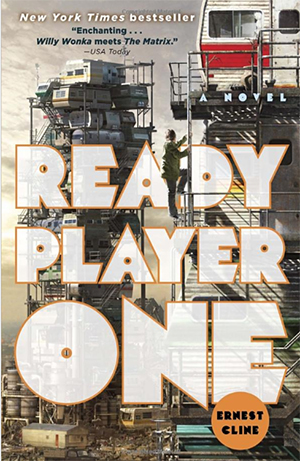 Cline co-authored the screenplay, based on the book, for a Steven Spielberg movie, which is due in theaters March 30, 2018.

WSU students with IDs can attend Cline’s campus talk for free. Tickets cost $15 for adults, and $10 for non-WSU students, and are sold through the Beasley Coliseum ticket office and TicketsWest.

Real-time streaming will deliver the lecture to WSU campuses in Tri-Cities, Everett, Spokane and Vancouver, thanks to the Global Campus.

“This is a very exciting year professionally for Mr. Cline and we plan to make his visit at WSU a highlight for him and for students and the community,” said Susan Poch, co-director of WSU Common Reading and chair of the book selection committee.

“Common readings are a great way to introduce students to the university’s academic environment, the power of thinking critically, and the excitement of exploring new topics through discussions and activities,” said Poch.

“The selection of Ready Player One as the shared book is unique in a couple of ways,” said Karen Weathermon, program co-director. “It’s the first time a novel has been chosen as the common read. And, the book taps into topics that today’s students are incredibly familiar with, such as technology that is pervasive throughout their daily lives, as well as through video-games and virtual-reality role-playing. We believe they will really identify with this year’s selection and Mr. Cline’s presentation, and we are very much looking forward to his visit.

“His talk will be a terrific springboard to our own year-long look at emerging technologies.”

Cline at a glance

Cline wrote the internationally best-selling novel, Armada, and the screenplay for adaptation, which is in the works at Universal Pictures.  He is also the screenwriter of the cult classic comedy Fanboys about die-hard Star Wars followers.

A self-described “full-time geek,” Cline was: born in Ashland, Ohio; ripped from his mother’s arms by a tornado at age one, but landed uninjured on a pile of scrap metal; addicted early to Atari 2600, Space Invaders, and Star Wars; proficient at amassing a large collection of classic video games; and, an acclaimed spoken-word presenter. He currently resides in Austin, Texas, with his family.

Because of their success, common reading programs have been adopted by many colleges and universities nationwide. Following is a link to a roundup of campus reading books for 2017-18.