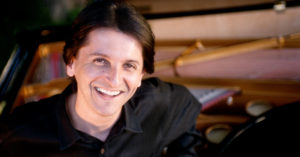 Jazz pianist Tamir Hendelman will perform with the award-winning WSU Jazz Band at 8 p.m. Tuesday, April 11, in Bryan Hall. Student soloists and jazz faculty will join to perform Hendelman’s compositions and jazz standards pulled from his recordings, “Playground” and “Destinations.”

Hendelman is on the jazz faculty at UCLA, has conducted numerous workshops in universities and music programs in the U.S. and abroad and has toured the U.S., Japan and Europe with his trio and as a member of the Jeff Hamilton Trio and the Clayton-Hamilton Jazz Orchestra.

The concert is made possible by the WSU School of Music, the Jazz Society at WSU, student music association Allegro and a Coug Parents grant. For more information, contact Brian Ward, WSU jazz studies coordinator, at brian.ward@wsu.edu.

Mark Janello – composer, harpsichordist and chair of music theory at the Peabody Institute – will give a recital on Baroque improvisation at 8 p.m. Monday, April 17, in Kimbrough Hall. The recital also will feature his work, “Concerto for Two Keyboards,” commissioned by the Aliénor Harpsichord Competition after he won first prize in 2012.

Janello will conduct a series of workshops April 17 and 18. For topics, times and locations, email lark.powers@wsu.edu.

Previously on the faculty at McGill University in Montreal, Janello has performed with the Washington, D.C. Bach Sinfonia, the Baltimore Symphony and the Post-Classical Ensemble. He is a frequent presenter at the national meetings of the Society for Music Theory.