PULLMAN, Wash. – Washington State University veterinary student Zena Hemmen painted a tribute to the victims of one of the country’s most horrific animal massacres. Called “49 Lives,” the painting shows exotic animals like those killed in 2011 in Zanesville, Ohio.

“I truly love ‘49 Lives’ because it represents a strong story, and I think the emotions I felt while creating the piece come through in the animal’s expressions,” she said. 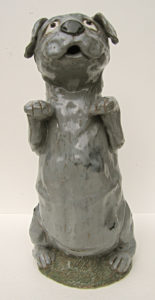 The painting and other works will be part of Hemmen’s “Art in the Library” exhibit, which opens Friday, Jan. 20, in the WSU Animal Health Library and runs through May. An opening reception is planned 4-6 p.m. Friday in the library, Wegner Hall 170.

The twice-yearly exhibit features animal-themed works, typically from artists with a connection to the WSU College of Veterinary Medicine. For more information, visit http://www.vetmed.wsu.edu/news/art.

Hemmen was an undergraduate fine arts student at Oregon State University (OSU) when the story of the Zanesville animal massacre broke. Terry Thompson, owner of Muskingum County Animal Farm, a private zoo for exotic animals, released 56 of the zoo’s inhabitants before turning a gun on himself.

Along with “49 Lives,” her exhibit will showcase other pieces done in acrylic paint, oil paint, encaustics, wood, canvas, fabric, nails and more.

“This body of work is more about depicting animal personalities, exploring animal form and presenting mixed media studies,” Hemmen said. “I am fascinated with the diversity of animals. Animals come in all shapes and sizes, and they can survive in so many climates.

“I like that we are unable to fully understand animals, but we strive to discover what we can and extrapolate on it,” she said.

Finding family in the CVM

Hemmen graduated from OSU in 2012 with a bachelor’s degree in fine arts, but she also took preveterinary courses. She will graduate as a doctor of veterinary medicine from WSU in spring 2018. She plans to pursue an equine internship at a private practice followed by an equine residency at a university – a case of life imitating art.

“My artistic interests have always been rooted in the mechanics of the equine form,” she said. “I am especially interested in horse conformation and how it relates to function. I have to admit, I was that little girl who was absolutely obsessed with horses.”

Hemmen said she chose WSU’s College of Veterinary Medicine not only for the in-state tuition (she is a native of Bainbridge Island), but also because, from the beginning, people treated her like a colleague instead of an entering student.

“We are so fortunate to have such a wonderful veterinary school in our state,” she said. “The students, faculty and staff at WSU CVM are a family. They strive every day to include everyone and provide the best opportunities that they can.”