Reserved seating costs $16 adults, $13 seniors (ages 60+) and $8 students and youth. A discount on adult and senior ticket prices is available for groups of eight or more.

Tickets are available at TicketsWest outlets, including online at http://TicketsWest.com, by phone at 800-325-SEAT (7328), and in person at the Beasley Coliseum ticket office (open 10 a.m.-2 p.m. Monday-Friday) and the Lewiston, Idaho Rosauers supermarket. Same-day tickets will be available at the Daggy Hall box office beginning two hours before the performance, subject to availability. 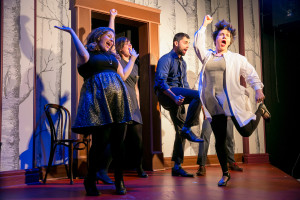 With the debut of NBC’s “Saturday Night Live,” populated by Second City alums like John Belushi, Dan Aykroyd and Gilda Radner, The Second City (http://www.secondcity.com/) became internationally known for its roster of comedy powerhouses. The theater recently celebrated 55 years of producing cutting-edge satirical revues. It continues to launch the careers of comedy superstars.

For more information about WSU Performing Arts, including the 2015-2016 season, ticket prices and packages and a Jones Theatre seating chart, visit http://performingarts.wsu.edu.