SEATTLE – Washington state’s hometown airline is teaming up with the Washington State University-led Northwest Advanced Renewables Alliance (NARA) to advance the production and use of alternative jet fuel made from forest residuals, the tree limbs and branches that remain after a forest harvest.

As the airline partner for NARA, Alaska Airlines intends next year to fly a demonstration flight using 1,000 gallons of alternative biofuel being produced by the NARA team and its many partners. The planned flight signals a growing interest in the aviation industry for a viable alternative to conventional fossil fuel. 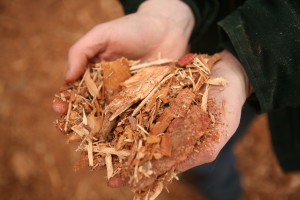 NARA’s focus is on developing alternative jet fuel derived from post-harvest forest residuals. Residual treetops and branches are often burned after timber harvest. By using these waste materials as the feedstock of a biojet fuel supply chain, NARA and its aviation industry partners seek to reduce fossil fuel use and greenhouse gas emissions as well as bolster sustainable economic-development potential in timber-based rural communities located throughout the Pacific Northwest.

NARA is a five-year project supported by the U.S. Department of Agriculture National Institute of Food and Agriculture. It is comprised of 22 member organizations from industry, academia and government laboratories. Its mission is to facilitate development of biojet and bioproduct industries in the Pacific Northwest using forest residuals that would otherwise become waste products. A key task of the project is to evaluate the economic, environmental and societal benefits and impacts associated with such developments.

“Developing alternative jet fuel made from forest residuals represents a significant economic challenge with considerable sustainability benefits,” said Michael Wolcott, NARA co-director. “While the price of oil fluctuates, the carbon footprint of fossil fuels remains constant. NARA efforts to engage stakeholders from forest managers to potential fuel users like Alaska Airlines to lay the foundations for a bio-based, renewable fuel economy is exciting work that we believe will benefit society in the years ahead.”

In 2011 Alaska Airlines became the first U.S. airline (http://splash.alaskasworld.com/Newsroom/ASNews/ASstories/AS_20111107_005216.asp) to fly multiple commercial passenger flights using a biofuel refined from used cooking oil. The carrier flew 75 flights between Seattle and Washington, D.C. and Seattle and Portland, Ore. Alaska has set the ambitious goal of using a sustainable aviation biofuel blend on all flights departing one or more airports by 2020. Later this year, Alaska will fly the first commercial flight using an alcohol-to-jet fuel.

Learn more about the NARA project at http://www.nararenewables.org.