PULLMAN, Wash. – Washington State University takes the cake as it celebrated 125 years as an institution Friday.

Celebrating a day early due to the weekend, the Student Alumni Ambassadors helped honor WSU by distributing free slices of intricately decorated cakes made by staff at the Compton Union Building. 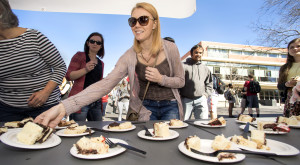 Twenty sheets of white, carrot, chocolate lentil and lemon garbanzo bean cake detailed with crimson and gray flowers, frosting and sprinkles were enjoyed by Cougs passing by on the Glenn Terrell Mall.

Here are some fun facts about WSU:

▪ WSU was created as a direct result of the federal Morrill Act, signed into law by President Abraham Lincoln

▪ The first sports moniker was the Farmers

To learn more about WSU’s mission serving the state of Washington and the world during the last 125 years, visit http://www.wsu.edu/125.