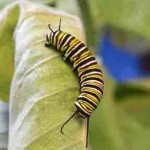 America’s beloved monarch, famous for its migrations and striking black and orange markings, is in crisis. That’s why the federal government’s recent announcement that it will consider giving the species official listing as a threatened species is a critical first step, according to a Washington State University scientist who has studied monarchs for four decades.

“In less than 20 years, their population size in North America has plummeted by roughly 90 percent. That’s an extreme, if not alarming, drop,” said entomologist David James, who tracks monarchs’ migratory routes through the Pacific Northwest and coauthored a book about butterflies in the region.

“The monarch is an iconic American insect that holds an important place in the ecological chain. It has suffered a huge decline and warrants protection,” he said, adding that the butterflies which regularly adorned meadows and gardens in the Pacific Northwest are becoming scarce.

“We have them here, but we used to have a lot more. Most people are lucky to see one or two a year,” he said.

James’ comments come on the heels of a decision by the U.S. Fish and Wildlife Service to conduct a one-year status review of the monarch to determine if protective status is justified under the “threatened” classification of the Endangered Species Act. Last November, James, along with 26 other monarch experts and defenders, signed a letter to the Secretary of Interior supporting a petition filed by conservationist groups requesting a review be conducted.

“Naturally, it’s great news that the government took notice and will now evaluate the factors behind the massive threat the monarch butterfly is facing,” he said. “It’s not too late to turn this situation around but we need nationwide recognition of the monarch’s plight. Listing the monarch as ‘threatened’ should achieve this.”

Late each summer, monarchs migrate southward through the United States to overwinter in California and Mexico, a journey that can cover as many as 3,000 miles. Flying on a combination of prevailing winds, thermal waves and hard-wired impulse, an estimated one billion monarchs migrated annually. But the number of them taking this age-old journey has drastically decreased. Last winter, 35-million were documented at overwintering sites in Mexico—the lowest number on record, according to the Arizona-based Center for Biological Diversity, one of the groups that petitioned the government.

The butterflies have lost 165-million acres of habitat, an area the size of Texas, according to the center.

And though severe weather in the U.S. and deforestation in Mexico appear to contribute to this decline, the biggest culprit is a waning food source: the milkweed wildflower, said James. Milkweed is the only plant on which female monarchs lay their eggs and it is the only food source for the emergent caterpillars, he explained.

But herbicides are causing a huge die-off of the plant. “They’re being sprayed on crops genetically modified to withstand them while killing milkweed that serves as critical habitat for monarchs,” said James.

Listing the monarch as a threatened species would make milkweed restoration a national priority involving farmers, utilities, homeowners and public-land managers, he said. “It would definitely be a group effort.”

Weighing less than a dime, the Monarch butterfly possesses the stamina to flutter across national borders and multiple state lines under the right conditions.

What if it becomes extinct?