PULLMAN, Wash. – Chronicling a silent chapter in history, “Within the Silence” is a moving account of Japanese American internment during World War II. It will be presented by Living Voices at 7:30 p.m. Thursday, Nov. 13, in Daggy Hall’s Jones Theatre at Washington State University. It is recommended for ages 9 to adult.

Tickets cost $10 adults, $8 seniors (60+) and $5 non-WSU students and youth. Tickets are free for WSU students and are available in advance only at the Beasley Coliseum ticket office with valid WSU ID. WSU Alumni Association member and group discounts are also available. 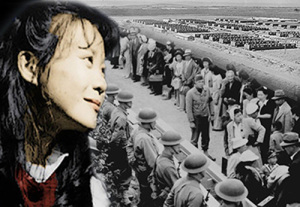 Reserved seating tickets are available at TicketsWest outlets, including online at http://TicketsWest.com, by phone at 800-325-SEAT (7328) and in person at Beasley Coliseum (10 a.m.-2 p.m. Monday-Friday) and the Lewiston Rosauers. Same-day tickets will be available at the Daggy Hall box office beginning two hours before the performance.

Emiko Yamada is a teenage girl growing up in Seattle’s Nihonmachi (Japantown) when, in 1942, President Roosevelt’s Executive Order 9066 imprisons thousands of Americans in “relocation centers.” The Yamadas must abandon their home, possessions and the life they know for the barracks, guard towers and barbed-wire fences of the Minidoka Relocation Center near Twin Falls, Idaho.

Told through Emi’s eyes, this solo performance uses archival film and photos as backdrop to the story of one incarcerated family’s fight to sustain faith in each other and the country they love amid the clamor of wartime hysteria and the silence that follows.

“Within the Silence” was written by Ken Mochizuki and coproduced by Seattle’s Wing Luke Museum of the Asian Pacific American Experience.