PULLMAN, Wash. – With the midterm election seven weeks away, outside interest groups are pumping a record amount of anonymous “dark money” into television political ads, according to a Washington State University researcher who tracks national campaign advertising.

“I suspect the numbers will go up even more during the crucial weeks leading up to Nov. 4,” said WSU political scientist Travis Ridout, co-director of the Wesleyan Media Project, which recently released a report showing a surge of political spending, mostly on highly contested U.S. Congressional seats. (See http://mediaproject.
wesleyan.edu/2014/09/04/
heated-battle-for-u-s-senate-draws-deluge-of-outside-group-ads-most-are-dark-money/)

Not only is a lot of money being spent on broadcast ads, but it’s frequently being done in secret, said Ridout. Unlike candidates and political action committees, dark money groups – those able to claim tax status as social welfare organizations – can keep individual contributors anonymous.

“Our analysis indicates that campaign contributions have gone up significantly during the past four years and they are increasingly dominated by dark money groups,” he said.

In 2010, a divided U.S. Supreme Court ruled in Citizens United vs. the Federal Election Commission to lift restrictions on the amount of money corporations can contribute to political campaigns. This, in turn, paved the way for special-interest groups to form tax-free organizations that don’t have to disclose donors’ names. 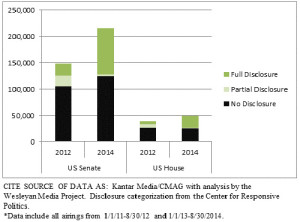 Such groups have spent $68 million on TV ads in the current election cycle, a record for this phase of a midterm election, according to the Wesleyan report.

Leading the dark money pack is Americans for Prosperity, a conservative organization backed by the billionaire Koch brothers, with donor contributions of $16.7 million to buy ads, the study found. The next top spenders are Crossroads GPS, affiliated with Republican political consultant Karl Rove, and the U.S. Chamber of Commerce. The largest Democrat-aligned dark money group is Patriot Majority USA, which has spent $6.2 million so far.

Much of the advertising is aimed at trying to sway voters to determine which party will control the U.S. Senate, said Ridout. With Democrats struggling to hold on to their 8-year majority and Republicans devising a takeover, “the stakes are high in this election. At the same time, it’s easy for outside groups to pull in large amounts of money to try to influence public opinion,” he said.

Nowhere is this happening more than in North Carolina’s tight Senate race, where 90 percent of the ads flooding airwaves are sponsored by outside groups, according to the Wesleyan analysis. Outside-funded ads are also hitting hard in Michigan, Louisiana, Kentucky and Alaska, according to the report.

“What we’re seeing is that much of the political debate is being defined by outside players who give voters little information about who they are,” said Ridout.

With such high dark-money spending during a midterm, it’s bound to be considerably higher in the 2016 campaigns because of increased interest and higher voter turnout generated by a presidential election, he said.

Will the influx of cash help decide who wins and who loses or will voters, inundated by ads, start tuning them out or even turning them off?

“My guess is that as airwaves become more crowded with ads during the next few weeks, more people will be turning to Netflix,” Ridout predicted.

The Wesleyan report was done in partnership with the nonprofit Center for Responsive Politics using data obtained by Kantar Media/CMAG media analysts.