PULLMAN, Wash. – In a first-ever study, researchers at Washington State University are examining whether grizzly bears make and use tools. And while it’s too soon to reach a broad scientific conclusion, at least one female bear is demonstrating that, yes, she definitely can.

Information gleaned from the study can be used to help wildlife managers better solve grizzly-related challenges and problems, according to researchers, and also assist zookeepers in keeping captive bears mentally and physically stimulated.

The study, being conducted at WSU’s Bear Research Education and Conservation Center, is documenting eight grizzlies faced with the challenge of getting their claws into a dangling food snack that’s too high to reach. No training is involved. The researchers are chronicling innate learning behavior.

“While it’s generally accepted that grizzly bears are intelligent creatures, until now no scientific research had been conducted on their problem-solving skills,” said WSU veterinary biologist Lynne Nelson, who is overseeing the study.

In WSU’s controlled setting, eight brown bears—three males and five females—are being tested separately and are at various phases of the experiment, said Nelson. To date, a 9-year-old grizzly named Kio has sailed through each phase, essentially nailing the hypothesis that the species is capable of tool use.

Here’s how the study works: Inside the grizzly bears’ play area, a donut is hung on a string from a wire, too high for the animals to reach. First, each bear is tested to see if it will stand on a sawed-off tree stump to reach up and get the donut down. Once this is mastered, researchers move the stump away from the hanging donut and place it on its side. 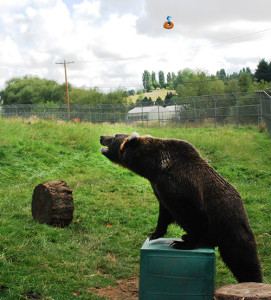 Here’s where things get challenging. The bear must move the stump until it is positioned underneath the donut and then flip the stump over into a makeshift footstool.

All of which Kio mastered early on: “She manipulates an inanimate object in several steps to help her achieve a goal, which in this case is to obtain food,” said Nelson. “This fits the definition of tool use.”

The other grizzlies are in the process of figuring out the feat, she explained, which confirms what the center’s scientists have long suspected about the keen brain power of bears. Frequently, Nelson and her colleagues witness grizzlies doing remarkable things, including using a single claw in a key-like manner to try to open locks.

Why should humans scientifically assess tool use among America’s greatest predators?

“If grizzly bears are capable of using tools to interact with their environment, that’s important for us to know because it provides a fuller picture of how they think,” said WSU veterinary student Alex Waroff, who designed the study and who, with Nelson, tests the bears five mornings a week.

“By better understanding their cognitive abilities, we can help reduce encounters that can turn deadly for bears and humans alike,” he said.

Such understanding also could shed light on whether the species is capable of manipulating its environment when faced with changes in the wild, such as shifts in habitat conditions or declining food sources, he explained.

As Nelson points out, most of the center’s grizzly bears were deemed “problem bears” in the wild and were brought to WSU as an alternative to being shot and killed.

“Grizzlies are smart foragers and they’ll work hard to get at food – which, as we’re seeing, can include some pretty sophisticated strategies,” she said.

The glazed donuts, donated by a local grocery store, are used to entice the bears for the study and aren’t part of their normal diet, said Nelson.

The study is expected to be completed this fall.