PULLMAN, Wash. – Let’s say you’re a bee and you’ve spotted a new and particularly lucrative source of nectar and pollen. What’s the best way to communicate the location of this prize cache of food to the rest of your nestmates without revealing it to competitors, or “eavesdropping” spies, outside of the colony?

Many animals are thought to deter eavesdroppers by making their signals revealing the location or quality of resources less conspicuous to outsiders. In essence, they’ve evolved “whispers” in their signals to counter eavesdropping.

But some species of bees in Brazil do the exact opposite. ”Shouts” in their food-recruitment signals warn would-be competitors that their prime source of food will be fiercely defended if they show up to the site.

It’s a communication strategy that’s bold and risky, yet remarkably successful in warding off competitors, according to a paper published in the July 7 issue of the journal Current Biology.

“It’s a signal with honest aspects and the possibility of lies,” said James Nieh, a professor of biology at UC San Diego who oversaw the research study conducted in Brazil by Elinor Lichtenberg, a Ph.D. student in his laboratory who is now a postdoctoral researcher at Washington State University. “It tells nestmates where to find good food and hints at a larger occupying force.”

Lichtenberg said her discovery of this counterintuitive method of communication by bees suggests that eavesdroppers can alter the evolution of animal signals in ways that were previously not thought possible.

To Nieh, whose research has focused on the evolution of communication strategies among bees, “eavesdropping is part of the information web, the signals and cues that surround animals and play a key role in shaping ecosystems.” 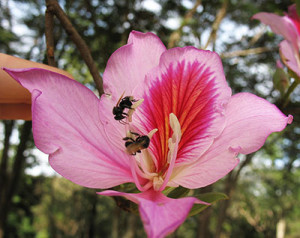 In the case of bees and other pollinators, he said, “a network of signals and cues shapes pollination, informing animals about where and when food is available. Researchers have in general thought about eavesdropping as a force that makes signals less conspicuous, leading to the evolution of ‘whispers’ to counter spying.

“However, we show that eavesdropping can also lead to ‘shouts,’” he said. “In this stingless bee system, with aggressive colonies jockeying for limited resources, more conspicuous food-recruitment signals indicate a higher likelihood that a resource will be harder to wrest away.”

Lichtenberg’s study focused on stingless bees—including two from the genus Trigona that recruit nestmates to food sources with chemically distinct pheromones—that compete with one another for similar food sources. Trigona hyalinata spies that detect food sources marked by Trigona spinipes foragers will often displace T. spinipes from desirable sites in the wild if they can recruit sufficient nestmates.

But Lichtenberg found in a controlled field study that the eavesdropping species will avoid desirable sources of food that have been visited frequently by T. spinipes (communicated by the larger number of pheromone markings at the site) to avoid being attacked. However, T. hyalinata foragers are attracted to food sources with fewer T. spinipes foragers.

The eavesdroppers could take over the highly visited sites by recruiting more of their nestmates or battling with T. spinipes bees, which show high levels of aggression toward intruders, but the risks and energy costs to the eavesdroppers apparently aren’t worth the trouble.

“Assembling such a group in the nest after having found a food source through eavesdropping uses time and energy the eavesdropper could otherwise spend looking for an unoccupied food source,” said Lichtenberg. “If the eavesdropper brings too small a group to an occupied food source and cannot win access to it, she and the bees accompanying her have essentially wasted energy. For attacks between colonies of the same species, there is also a risk that the conflict will escalate to physical interactions in which large numbers of bees may die.”

“Our study is one of the first to investigate what drives the behavior of eavesdroppers collecting information from competitors within the same trophic level, which use the same food resources as the eavesdropper,” she said.

“Previous eavesdropping research has mainly focused on individuals seeking mates, predators looking for prey or prey trying to avoid being eaten,” she said. “In those cases, eavesdroppers’ expected behavior is clear. This is not true for eavesdropping on competitors.”

The study not only provides information about the evolution of different strategies of animal communication, but suggests how these strategies can affect the ecology of plant communities.

“Such strategies affect not only the individuals directly involved, but also broader ecological interactions between the food-gatherers and their food,” Lichtenberg said. “This is particularly important for animals such as the bees I studied, because their movements determine plant pollination.”

Other authors of the paper were Joshua Graff Zivin of UC San Diego’s School of International Relations and Pacific Studies and Michael Hrncir of Brazil’s Universidade Federal Rural do Semi-Árido, where the study was conducted. Funding for the study was provided by grants from the National Science Foundation and the Animal Behavior Society.

Find video and images at http://ucsdnews.ucsd.edu/pressrelease/why_whispers_among_bees_sometimes_evolve_into_shouts