“Let me just say this, there are no wheat breeders like Steve in the country,” Barber said recently. 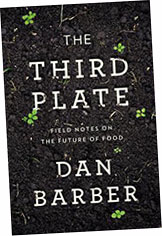 Two chapters of the book are devoted to the work Jones does breeding grain and testing new varieties at the bread lab at the Washington State University Mount Vernon Research and Extension Center.

The author said he believes chefs have a responsibility to shift “patterns of eating” to reflect local ecology and the needs of farmers, rather than the other way around. This transformation will be driven by an appreciation for flavor and will require more plant breeders like Jones and his graduate students who breed with flavor, nutrition, soil health and the bottom line for farmers in mind.

“There are other breeders who have a similar sort of fascination with food and flavor and nutrition and ecological resilience and economic return for the farmer,” Barber said. “But unbelievably, (even with more than) 56 milllion acres of wheat grown in this country, there are no Steve Joneses. You have him here, in your neighborhood.”

An appreciative, largely urban audience erupted in applause after Barber made the comment during a recent book-tour stop in Seattle.

Barber is not only a big fan of Jones, but also of the land-grant university system, which the author describes as “an instrument for public good,” and which supports Jones’ work to revitalize a regional grain economy.

Barber gave a brief lesson on the history of the land-grant college system established by Abraham Lincoln in 1862 to offer education throughout the nation in practical topics like agriculture and engineering.

“Your tax dollars go to support a land-grant college in every state in the country,” the author explained. “The land-grant university system is the envy of the world.”

Yet it’s challenging to write about because, as Barber puts it, it’s not sexy. He was disappointed that a more in-depth section he wrote about the topic was cut from the final version of his book.