Reganold, WSU Regents Professor of Soil Science and Agroecology, was recognized for his contributions as a sustainable food and farm educator. He is one of four people selected from hundreds of nominations submitted across the country for leadership in sustainable food systems.

“John’s research and outreach has put a national spotlight on the importance of healthy soil,” said Jonathan Kaplan, food and agriculture program director at the NRDC. “He has inspired and trained a new generation of sustainable farmers and food experts while validating the benefits of organic farming within the scientific community.”

Motivated by a growing concern about the long-term health of conventional agriculture, Reganold has devoted more than three decades to bringing innovative research and teaching on sustainable farming systems into the mainstream of higher education and food production.

His focus on ecologically innovative systems, such as organic, integrated and no-till, led him to establish the first four-year organic agriculture major in the United States and the nation’s largest certified-organic teaching farm at WSU.

“In the past 30 years, I have measured the effects of these alternative and conventional systems on soil health, crop quality, financial performance, environmental quality and social responsibility on commercial farms on four continents,” said Reganold. “The Growing Green Award means that I’ve had some success in contributing to the transfer of knowledge of sustainable food production systems to my students and, hopefully, to consumers and farmers.” 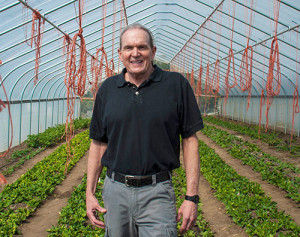 “When John came to WSU, organic agriculture was not part of the higher education landscape at WSU or any other land-grant university,” said Daniel Bernardo, WSU provost and executive vice president, who also acknowledged Reganold’s impressive body of research.

“John has been a trailblazer, and his persistence and leadership have allowed WSU to lead in this field,” said Bernardo.

Lynne Carpenter-Boggs, associate professor in the WSU Department of Crop and Soil Sciences, has worked with Reganold both as a student and colleague.

“John has been a brave visionary in education and student mentorship,” said Carpenter-Boggs, who earned a doctorate in soil microbiology and agroecology from WSU in 1997. “Many people started noticing the surge in interest in organic foods and sustainability, but he is one of very few who recognized the unique educational needs and opportunities for young people with these ideals and went about fulfilling those needs.

“John understands that vision is key to motivating students and developing creative projects, but clarity and factuality are non-negotiable,” she said. “Dot those i’s and cross those t’s, or your ideas will never be seen or taken seriously. This approach in his teaching and mentorship has cultivated students who can carry their ideals forward, armed with knowledge and skills, to create the world they want to live in.”

For more information about the Growing Green Awards, visit http://bit.ly/1iMPzFU.