BELLEVUE, Wash. – A new, readable history of Geronimo offers practical life and business advice gleaned from the Apache warrior’s leadership approach. A book signing will be at 6 p.m. Saturday, May 17, at the University Bookstore in Bellevue with author and Washington State University head football coach Mike Leach. 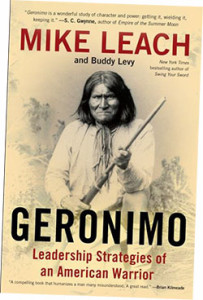 “Geronimo: Leadership Strategies of an American Warrior” (Gallery Books; hardcover $26) examines the strategies, decisions and personal qualities that made Geronimo a success.

“Much of his genius can be ascribed to old-fashioned values such as relentless training and preparation, leveraging resources, finding ways to turn defeats into victories and being faster and more nimble than his enemy,” according to the publisher. “Geronimo’s tactics would be studied and copied by the U.S. military for generations.”

“Leach … has always done things differently, always operated on the margins of what the football world considered acceptable,” writes S.C. Gwynne (bestselling author of “Empire of the Summer Moon”) in the book’s forward. “This sort of radically original behavior is what ‘Geronimo’ is all about.”

Leach took his previous football team at Texas Tech to 10 consecutive bowl games and holds the most postseason wins in the school’s history. He led the WSU Cougars to the New Mexico Bowl in his second year as coach. His memoir, “Swing Your Sword,” was a New York Times bestseller.

Levy is a journalist and historian who stars in “Brad Meltzer’s Decoded” on H2 TV. He is the author of “River of Darkness” and “Conquistador.”

The reinvigorated WSU System site features updated university branding as well as a greater emphasis on visuals and social media.