PULLMAN, Wash. – Washington State University history graduate students studying the oral histories of the Hanford Site have created an exhibit of its labor force and residents, running through May 16 in the Terrell Library atrium exhibit case. 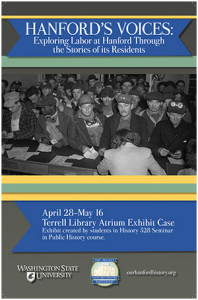 “Hanford’s Voices: Exploring Labor at Hanford Through the Stories of its Residents” pulled together students from the Vancouver, Tri-Cities and Pullman campuses enrolled in History 528, “Seminar in Public History,” according to course participant and history master’s student Robert Franklin.

To create the exhibit, the students relied on the Hanford History Partnership, which has collected narratives of the men and women who lived in the area before 1943 and who worked at the Hanford Site after.

“The Hanford Site in eastern Washington is known primarily for its role in producing plutonium for America’s atomic arsenal and for the waste that resulted from that nuclear production. Often overlooked are the people who worked at Hanford and the families who farmed the area prior to World War II,” Franklin said. “The exhibit’s themes of displacement, community, race, gender, security and safety help reveal the human experiences of those who lived and worked in the area.”

For more about the Hanford History Partnership, visit http://www.ourhanfordhistory.org/.