PULLMAN, Wash. – When Facebook founder Mark Zuckerberg acquired gaming headset company Oculus VR on March 25, he wrote, “This is just the start. After games, we’re going to make Oculus a platform for many other experiences. Imagine enjoying a courtside seat at a game… just by putting on goggles in your home.’’

Little did he know that, with the help of technology developed by Washington State University researchers and the company they started, his vision was already near reality. 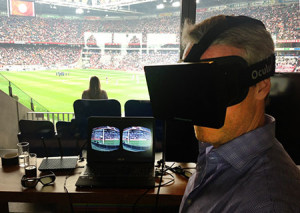 Less than a week after his comments, viewers in the luxury suites at the Amsterdam Arena did something close to what Zuckerberg imagined at the first-ever “immersive” viewing of a professional soccer match.

Fans using the Oculus headset were “virtually” on the sideline with 3D, surround video streams fed from multiple vantage locations on the field in real time. The user could, at will, switch to any location instantaneously and look around naturally to get the best view of the game, while being fully immersed in the headset.

“This is a holy grail of sorts,’’ said Uma Jayaram, associate professor in WSU’s School of Mechanical and Materials Engineering. Jayaram and her husband, S. Jay Jayaram, also a WSU professor, are co-founders with two others of the Pullman-based virtual reality and engineering company 3D-4U.

For years virtual reality has been a cool idea but wasn’t ready for popular adoption. Conducting their research among the wheat fields of the Palouse at WSU, the Jayarams have been studying and developing virtual reality applications since the 1990s.

At WSU, they founded the Virtual Reality and Computer Integrated Manufacturing Lab (VRCIM) and made seminal contributions in virtual reality applications in engineering design and manufacturing.

A few years ago, they co-founded 3D-4U with the goal of creating immersive virtual reality experiences. S. Jay Jayaram, a highly enthusiastic Cougar and Seattle Seahawks football fan, simply wanted to feel like he was at the game when he couldn’t be. Many of the company’s scientists and engineers who worked to develop the virtual reality-inspired technology are WSU graduates and were trained in the VRCIM lab.

In fall 2012 with renovation of Martin Stadium at WSU, the 3D-4U technology was used for the first time in a stadium.

The pioneering technology captures multiple live 180- to 360-degree fields of view and enables each viewer to determine a personalized view in real time or as a replay. Users can navigate their own replays, watch a player, pan, zoom or tilt their view – either live or during playback – to match their particular interests. Viewers have access and can control and switch views between four different camera feeds.

They can share their viewpoints on a unique social media platform that the company developed. The technology is available using a broad set of 3D and2D platforms, including tablets, 3D and 2D televisions, smart phones and computer screens.

“The technology is immersive, interactive and individualized”, said Uma Jayaram.

Last year, Sports Business Magazine, a national magazine for sports industry executives, named S. Jay Jayaram as one of its top idea innovators for his work in developing the personal event viewer. In addition, the technology has been adopted at high profile concerts, including by pop superstars Ricky Martin and Marc Anthony.

The company believed that a good headset would make the experience fully immersive and add a different dimension, said Uma Jayaram. The researchers proceeded with development despite hardware and bandwidth limitations at the time, confident that groups in different parts of the world would develop matching and synergistic technologies. They rightly anticipated that goggle technologies would catch up to their media technology.

Oculus VR was founded in 2012, raised $2.4 million through a Kickstarter campaign and was recently acquired by Facebook. The headset the company developed is not yet available commercially.

Once the Jayarams acquired an Oculus Rift prototype, it took them very little time to match the two technologies. 3D-4U successfully demonstrated the experience at Sunday’s soccer match in the Amsterdam Arena between the Ajax and Twente football clubs.

Uma Jayaram compares watching a sporting event in this virtual environment to the jump from silent movies to those with sound, something that was unimaginable for moviegoers before it happened. The 3D-4U technology is at the confluence of three of the biggest trends in media culture: increasing interactivity, social media and gaming, she said.

“We’ve reached a leveling off in how much bigger or smaller screens we can have and the hi-def improvements,’’ she said. “People want something new, and what 3D-4U provides is a new, very unique experience.’’