PULLMAN, Wash. – Hamlet takes a backseat to his funnier but equally doomed schoolmates when Washington State University Performing Arts presents “Rosencrantz and Guildenstern Are Dead,” a play by Tom Stoppard. Performances will be 7:30 p.m. April 4, 5, 11 and 12 and 2 p.m. April 5 and 12 in Daggy Hall’s Jones Theatre.

Hailed as “very funny, very brilliant, very chilling” by the New York Times, this tragicomedy is the fabulously inventive retelling of “Hamlet” from the worm’s-eye view of Rosencrantz and Guildenstern, two minor characters in Shakespeare’s play.

Repeatedly swept up in the intrigue of the Elsinore court and then promptly abandoned by it, the two unlikely heroes struggle to understand their world and the roles they play in it. An enigmatic thespian is their only guide as they stumble toward a tragic but inevitable end.

Reserved seating costs $10 for adults, $9 for seniors (60 and up) and $8 for WSU students. A discount is available for WSU Alumni Association members.

Tickets may be purchased in advance at all TicketsWest outlets, including online at http://www.ticketswest.com, by phone at 800-325-7328 and at the Beasley Coliseum ticket office, open 10 a.m.-2 p.m. Monday-Friday (closed spring break). Additional fees apply to online and phone orders. Same-day tickets may be purchased at the Daggy Hall box office beginning two hours before the performance. 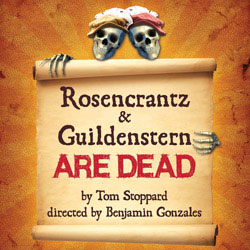 Called “a stimulating, funny, imaginative comedy” by the New York Daily News, “Rosencrantz and Guildenstern Are Dead” won the 1968 Tony Award for Best Play, the first of four for Stoppard, a British playwright and Oscar-winning screenwriter. He later adapted and directed the 1990 film version with Gary Oldman and Tim Roth in the title roles.

The WSU production is directed by Benjamin Gonzales and features Jon Rice as Rosencrantz, Jared Chastain as Guildenstern and Mary Trotter as The Player.

“‘Rosencrantz and Guildenstern Are Dead’ is a fascinating absurdist play,” says Gonzales, who first saw the play performed by a local civic theater where he grew up.

“I was very young,” he says. “At the time, I did not know what exactly it was that I saw, but I loved it…. It is funny and fantastical. It’s grim without being heavily dark…. There are many times when the play relies on comedy but will still be full of thought-provoking insight.”

Seamlessly blending verbal acrobatics and physical comedy with deeper philosophical themes, this is also a play that rewards repeated viewing.

“It is thick with nuance,” says Gonzales. “I am still finding new things about the play during this rehearsal period.”

For information about upcoming events or to view a Jones Theatre seating chart, visit the WSU Performing Arts website at http://performingarts.wsu.edu.

“Rosencrantz and Guildenstern Are Dead” is presented by special arrangement with Samuel French, Inc.