PULLMAN, Wash. – Mapping the genome of a child from the Clovis period has shown his family is the direct ancestor of roughly 80 percent of present day Native Americans, according to a paper published today in the journal Nature (http://www.nature.com/nature/journal/v506/n7487/full/nature13025.html).

“It is a very exciting article about an ancient human DNA genome that is helping us better understand the peopling of the Americas,” he said. 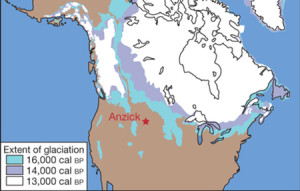 The Clovis people lived in America about 13,000 years ago. Who they were and which present day humans they are related to has been debated intensely.

Only one human skeleton exists that was found in association with Clovis tools – a small boy boy about 1 year old found at the Anzick Site in Wilsall, Mont.

An international team including Cornejo and headed by Danish researcher Eske Willerslev has mapped his genome, thereby reviving the scientific debate about the colonization of the Americas.

The boy’s remains will be reburied sometime this year in cooperation with Native American tribes in Montana.