PULLMAN, Wash. – More than 200 youth will take on the roles of lobbyists at the annual Washington State University Extension 4-H Know Your Government Conference in Olympia Feb. 15-18 at the Red Lion Hotel.

The conference is a hands-on educational opportunity for high school youth. Teens from across the state will lobby in mock committee hearings for and against active bills being considered in the Legislature. 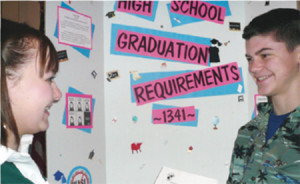 “Our youth delegates will learn that most bills are the result of compromise and negotiation,” said Jan Klein, WSU 4-H state teen leadership coordinator. “They’ll be working with other teens to realize that democracy requires responsible citizenship, participation and teamwork to be fully involved and effective when lobbying for change.”

As a community service project, teens will plant trees, remove invasive species and mulch 10:45 a.m.-12:15 p.m. Monday, Feb. 17, at Decatur Woods Park. Pledge money raised will go toward helping a 12-year-old boy from Leavenworth who has muscular dystrophy. The project is a partnership with the City of Olympia Parks, Arts & Recreation Park Stewardship Program.

Lobbyist Heather Hansen will be the opening speaker at 5:30 p.m. Saturday, Feb. 15. She has managed her own government relations firm since 1997 specializing in agricultural, natural resource and tax issues at both the state and federal levels.

Sam Reed, former Washington secretary of state, will give the keynote dinner address Feb. 17. A 2009 Governing Public Official of the Year, he also served as auditor of Thurston County, assistant secretary of state and director of the State Constitutional Reform Commission.

More than 90,000 youth participate in 4-H programs statewide in areas including science, leadership, service learning, the arts and technology.

Learn more about the conference at http://4h.wsu.edu/conferences/KYG/.