By Adrian Aumen, College of Arts and Sciences

PULLMAN, Wash. – Whatever caused tens of thousands of Pueblo farmers to suddenly leave their ancient homeland in southwestern Colorado in the late AD 1200s is one of the great mysteries in archaeology. Discoveries could aid understanding of contemporary societies.

The famous exodus is among puzzles investigated by the Village Ecodynamics Project (VEP), a research effort led at Washington State University by Tim Kohler, regents professor of anthropology. The project was one of 10 recently honored at the first Shanghai Archaeology Forum (SAF) for producing “major archaeological research findings.” 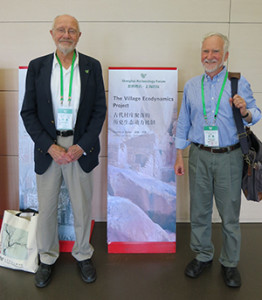 Archaeology experts from around the world chose VEP from among 99 nominated projects. Kohler traveled to China with longtime colleague Bill Lipe, WSU emeritus professor of anthropology, to accept the award and present the research.

“This project illuminates a new way forward in which archaeologists can ask, and hope to answer, questions they have never been able to consider,” Lipe said.

The key is a unique “combination of modeling and empirical research that is much more powerful than either approach would be by itself. It exemplifies a rigorous and systematic new approach to archaeology that is our most promising future,” he said.

Launched in 2001, VEP uses computer simulation to examine Pueblo societies’ responses to environmental changes “and also how they changed their environments,” Kohler said. Climate change and intercommunity warfare are prime suspects in the sudden desertion of the large Mesa Verde region, which extended from what is now Mesa Verde National Park in Colorado west into southeastern Utah.

“Then, as now, climate change caused stress to the coupled social and environmental systems,” he said.

Most studies point to severe shortages of resources amid increasingly dense populations in an area marginal for farming. Other studies suggest significant sociopolitical changes occurred just before the mass migration to the south and southeast, where the Puebloans’ descendants live today.

Armed with this knowledge, sociologists and anthropologists can better predict how contemporary societies will respond to climate change.

Researchers simulate where prehistoric people would have situated their households based on the natural and social environments. 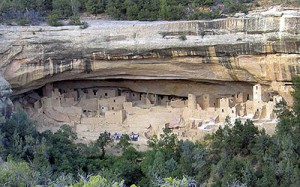 Various factors – such as farming soil, access to water and access to animals for hunting – are input in order to recreate the human and climatic conditions of the time. Simulated residents situate themselves on the landscape in relation to these resources and the locations of other households with which they interact.

Settlement patterns are compared to the archaeological record, enabling researchers to draw more informed conclusions about what may have occurred.

The model shows high levels of response to the effects of climate change on the landscape and to resource depletion by the large population of farmers. By evaluating the possibility of crises in potable water, woody fuels and protein, the research is helping determine whether critical resource shortages or social factors most influenced depopulation.

“VEP has made progress in understanding why dramatic demographic and sociocultural changes occurred in prehistoric Pueblo societies and even more progress in documenting precisely how and when these changes took place,” Lipe said.

Since the mid-1990s, social science researchers have grown more interested in computational approaches including simulation. This appears to be driven by a cross-disciplinary interest in the sciences of complexity and increasing computational capacity.

In the past, the complexity of the phenomena forced researchers to use simplistic world models. Today, they are able to study a world in which most important phenomena emerge from the non-linear interaction of many agents (physical, biological, social) in systems that are rarely at equilibrium.

The project is funded primarily by the National Science Foundation Dynamics of Coupled Natural and Human Systems program, which funds efforts that “contribute to our understanding of natural processes and cycles, human behavior and decisions and how these interact.”