PULLMAN, Wash. – The first young adult book from Washington State University Press has earned an honorable mention in the 2012 Idaho Book Award competition. “Be Brave, Tah-hy!” is biographical novel of the Nez Perce from the perspective of Chief Joseph’s young daughter.

Since 1984, the Idaho Library Association annually has honored books with an Idaho setting, with significant Idaho content or written by a state resident. WSU Press publishes books with a cultural or historical relationship to the Pacific Northwest. 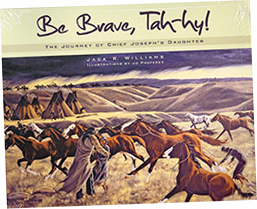 Based on actual events, the book covers the Nez Perce war of 1877 including the band’s escape to Canada and return to a new life in Lapwai, Idaho.

Author Jack Williams worked and lived on the Nez Perce Reservation in northern Idaho 1969-74. Several tribal members, hoping to correct errors and misconceptions from previous accounts as well as educate future generations about their history and culture, approached him with an idea for the book.

Unlike other popular novels featuring Chief Joseph’s daughter, Williams does not portray her as a modern heroine. Instead, her thoughts and actions are appropriate for a girl of her time and background.