PULLMAN, Wash. – The Washington State University and University of Washington football teams tied 5-5 in their first Apple Cup on Nov. 29, 1900, in Seattle. Coverage in The Evergreen, WSU’s student newspaper, fanned the flames for the rivalry that continues today: “No one denies that our defensive work was far superior to that of the U. of W.,” the front page reported on Dec. 5, 1900.

Just in time for this year’s Apple Cup – also on Nov. 29 and in Seattle – WSU Libraries has made available online this Evergreen article, other newspaper reports, football programs and game films. The Digital Football Films Collection can be found at http://www.wsulibs.wsu.edu/masc/footballfilms. The Apple Cup timeline and related content is at http://digitalexhibits.wsulibs.wsu.edu/neatline-time/timelines/show/2. 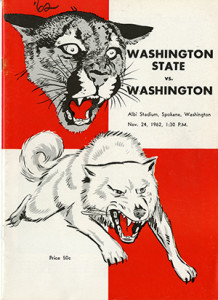 “At no time did our team have to relieve itself by punting,” continues the Evergreen article from 1900. “A chart of the game would show the ball to be in U. of W.’s territory most of the time, and at least two-thirds of the time in the hands of our players…

“The U. of W. people wore no long faces nor indulged in no lamentations over the resultant tie,” the article quoted. “Instead it was a look of satisfaction, for they realized how near they had been to defeat, at one time only lacking one inch.” 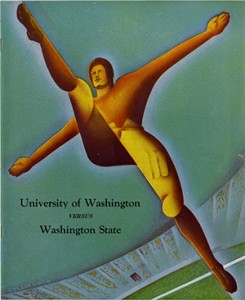 University archivist Mark O’English said Manuscripts, Archives and Special Collections (MASC) hold films covering close to 500 WSU football games dating from the 1916 Rose Bowl to present day. Forty-six of those game films were for the Apple Cup between 1929 and 1988.

A new project started last year, thanks to financial support from the J.L. Stubblefield Trust, allowed many of the films to be digitized, described and electronically preserved. So far, about 270 films have been added to the WSU Libraries collection.

“It’s nice to have all the Apple Cup films, media coverage and programs in one place,” O’English said.

One Apple Cup film worthy of note is from 1982, the year the Huskies were ranked No. 5 and predicted to go to the Rose Bowl. Not only did the Cougars pull off a 24-20 upset on their home turf, but ecstatic fans swarming the field at the end of the game also pulled down the uprights in the end zone – all captured on film.

From silence to Keith Jackson

Most of the films in the broader collection are silent coaching films, usually in black and white, O’English said. But the 1958 WSU game films were accompanied by the Cougar fight song – and the deeply familiar voice of WSU alum and sportscasting giant Keith Jackson. 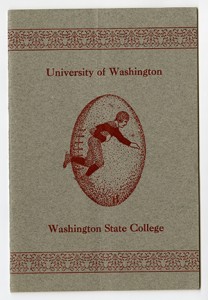 “I was excited when I heard Keith’s voice,” O’English said. “He went on to become the granddaddy of college sports broadcasting.”

Another historical gem in the WSU football films is the 1939 WSU vs. UCLA game, which featured the legendary Jackie Robinson, running back for the Bruins. Robinson ran in two touchdowns against the Cougars, amazing to watch even in the grainy clip.

Footage from two WSU Rose Bowls – 1916 and 1931 – is highlighted in special feature boxes on the main website. (Check out the ostrich-drawn carriage, at 2 minutes and 20 seconds, in the 1916 film.)

For fans and posterity

O’English sees the film collection as an integral part of the Cougar football experience.

“As these films were produced by Washington State, MASC is able to reproduce these for public use in the interest of both preserving them for historical posterity and sharing them with Cougar fans, as well as football aficionados and fans of the other teams that were also part of the films,” he said. “It’s wonderful to see this kind of history.”