PULLMAN, Wash. – A new digital collection at Washington State University Libraries shows how propaganda posters – or “weapons on the wall” – helped governments influence citizens’ public and private behavior and decisions during World Wars I and II.

The Propaganda Poster Digital Collection, roughly 520 images of posters made 1914-1945, is available at http://content.wsulibs.wsu.edu/cdm/landingpage/collection/propaganda.

Before radio and television, governments turned to other media to communicate information to the public during wartime, said Trevor Bond, head of WSU’s Manuscripts, Archives and Special Collections (MASC). One of the best forms of communication was the propaganda poster.

The U.S. government produced an estimated 20 million copies of more than 2,500 posters during World War I.

Posters in the WSU Libraries collection date back to the 1910s. They became part of then Washington State College’s War Library, a collection of rare books, pamphlets, posters and other items established in 1937-38.

The poster collection continued to grow through donations from various sources, including several benefactors. In 2009, nearly 300 posters from several collections were combined and cataloged by MASC manuscripts librarian Cheryl Gunselman and WSU student Amy Sabourin.

University archivist Mark O’English and another WSU student, Morgan Clendenning, inaugurated use of the libraries’ new oversized scanner this year by digitizing the collection and adding about 220 more posters, primarily from World War II France.

If the propaganda posters strike an emotional chord, they’re meant to, Gunselman said. People moved by the images and messages were more likely to take action – much like how advertising works today. 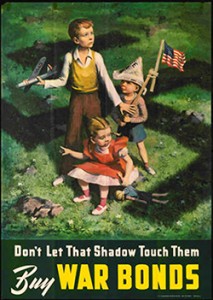 One of her favorites is “Don’t Let That Shadow Touch Them,” created by noted American painter, sculptor, lithographer and illustrator Lawrence Beall Smith in 1942 to encourage people to buy war bonds.

In the poster, three children play on the grass under the shadow of a Nazi swastika. The oldest child, holding a toy plane, puts a protective hand on his younger brother, who is carrying an American flag. Their sister sits in the grass with her doll, looking fearful as part of the shadow covers the doll’s legs.

“The collection serves as a great starting point for others to study the artists who created the posters or the messages and styles that were depicted in them,” Gunselman said. “They’re a very rich historical and cultural resource.”