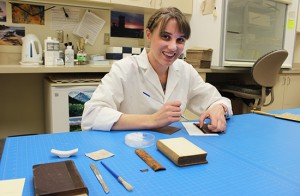 PULLMAN, Wash. – In November 1966, the flooding Arno River fouled some 3 to 4 million books and manuscripts and 14,000 movable works of art in the libraries and museums of Florence, Italy.

International rescuers worked quickly to save the Renaissance treasures from 600,000 tons of mud, sewage, oil and rubble. They sent books to drying granaries and tobacco kilns around Italy to prevent mold from growing. Others applied rice paper or gauze to paintings to keep their colors intact.

Nelson will conduct a tour of the MASC conservation lab during a free, public open house 2-4 p.m. Thursday, Nov. 14, starting in the MASC main lobby, Terrell Library ground floor. She will also describe basic ways to care for and preserve historical documents.

‘Repairing bad repairs from the past’

Almost 50 years after the Florence flood and on the other side of the Atlantic Ocean, Nelson gently holds a 16th-century book of Gregorian chants that can’t be opened all the way. It was rebound at one point, but too tightly. Not all conservation techniques developed since the flood preserved the original work’s integrity.

“A lot of what I do is repairing bad repairs from the past,” she said.

Conservation repairs are meant to stabilize a book or artwork, prevent further damage and even improve it for future use, Nelson said. But sadly, many repairs in the 1960s and 1970s actually damaged collections. Lamination, permanent glues and rebinding with acidic paper all cause archival materials to degrade.

“We try to make repairs reversible so if a technique is found to be damaging, it can be undone,” she said. “These kinds of minimally invasive repairs also preserve as much of the item’s original material, appearance and character as possible.”

Tools of the trade

Seated at a table with a gridded blue top in the MASC conservation lab, Nelson is repairing a book with a torn cover. Within reach are the tools of her trade: a scalpel, sandpaper, a brush, a piece of Japanese tissue and a Petri dish of wheat paste.

The tissue will be used to reattach the cover to the book’s spine. The paper is acid-free, thin but also very strong—the first choice for mending tears.

Made from the long fibers of the kozo plant, mitsumata shrub or gampi tree, Japanese tissue strengthens a fragile document because of its interlocking weave. It comes in many colors and thicknesses.

Nelson applies a thin strip of wheat paste to the tissue and glues it to the cover, which she prepared earlier by separating a small section of the cover paper from its board, sanding the board down and brushing away the dust.

Wheat paste is a non-permanent glue; it can be loosened and removed with water. Should a better technique for mending tears be developed in the future, all traces of Nelson’s repair work could be reversed without damaging the book.

She makes her repairs with the confidence of long practice. In fact, she’s no stranger to MASC, WSU or Pullman. A townie since the age of 12, Nelson started at WSU Libraries as a Whitworth University student in 2009, working on an archives internship.

Her first day on the job, she was assigned the conservation lab and loved it, she said. Later, one of her main responsibilities was repairing rare early modern books for a grant-funded conservation project.

“They’re all much happier now,” Nelson joked about the books that have passed through her careful hands.

“Hundreds of paintings, frescoes and wood crosses lie in storerooms throughout the region, still covered in mud and debris,” noted writer Rossella Lorenzi in the article “After the Deluge” in the February 2007 issue of ARTnews magazine. “‘Scarce funding makes it likely that it will take another 40 years to restore the remaining pieces,’ Bruno Santi, Florence’s art superintendent, said at a press conference.”

Asked whether an object is beyond hope of preserving, Nelson said she has never found one. If repair measures are cost prohibitive or the work is too fragile for restoration, it can be placed in an acid-free enclosure and guarded from temperature and humidity extremes in a climate-controlled environment.

In other words, it will wait for rescue.

“Something can always be protected,” she said, “if nothing else until the technology for preservation improves.”

Note: Light refreshments will be served at the tour and open house. For details, contact MASC director Trevor Bond, tjbond@wsu.edu.