PULLMAN, Wash.—A nationally prominent sociologist and expert in crime studies will discuss poverty, crime and social structures of American cities and neighborhoods in a free, public presentation on Thursday, Oct. 17, at Washington State University in Pullman. 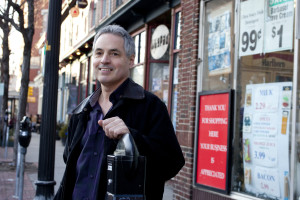 Robert J. Sampson, one of the nation’s top scholars in studies of urban inequality, social structures and  civic engagement will present “Neighborhood Inequality and the New Social Transformation of the American City” at 7 p.m. in the Compton Union Building, Junior Ballroom. WSU will honor him with the William Julius Wilson Award for the Advancement of Social Justice as capstone to the 2013 William Julius Wilson Symposium.

“Rob Sampson is one of this country’s most imaginative, persistent, and tough-minded researchers into social life and the human condition. He is a most worthy recipient of the award,” said James Short, WSU emeritus professor of sociology.

The university-wide symposium brings together scholars and practitioners in the social sciences while it honors the work and contributions of William Julius Wilson, a WSU alumnus, distinguished professor at Harvard University and national leader in the field of sociology.

Wilson will address WSU audiences and present the award to Sampson in recognition of his “significant contributions to social policy, promotion of social inclusiveness and diversity, and reduction of joblessness.” A moderated question-and-answer session will follow.

He has contributed widely to the field of sociology and the public’s understanding of the connection between poverty and crime, dispelling myths about minorities and immigrants. His recent book, “Great American City: Chicago and the Enduring Neighborhood Effect,” strives to develop a theory of social life and illuminates the importance of tending to vulnerable communities.

WSU created the William Julius Wilson Symposium and the Wilson Award for the Advancement of Social Justice in 2009 to honor individuals who promote social inclusiveness and diversity in social policies and strive to reduce joblessness.

“William Julius Wilson has profoundly influenced public discussions of social inclusiveness, poverty and joblessness and helped shape social policies around these critical issues. The symposium in his honor demonstrates WSU’s commitment to a better understanding and progress in addressing these complex challenges,” said Julie Kmec, associate professor of sociology and chair of the symposium organizing committee.