PULLMAN, Wash. – Retail giant Amazon recently launched a Spanish language website. Meanwhile, the Latino pop song “Despacito” made history for being the most streamed track of all time. Two examples of the escalating visibility of Español in the 21st century.

PULLMAN, Wash. – The Writing Program at Washington State University has been ranked among the top 19 in the nation by U.S. News & World Report in its annual “Best Colleges” issue released on Sept. 12.

RICHLAND, Wash. – Washington State University Tri-Cities signed a memorandum of understanding Wednesday, June 28, to partner with Vanwest College from Vancouver, British Columbia, and Mahasarakham University from Talat, Thailand, for a language and cultural exchange program that will benefit students from each of the three campuses and countries.

A pair of internationally renowned Maya scholars will visit WSU on Thursday, April 20, to speak about Indigenous language revitalization, as well as research ethics and relationships between Native and non-Native scholars. 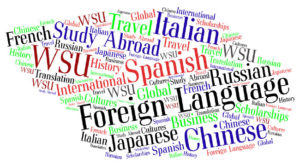 PULLMAN, Wash. – Bleached hair, blue-eyed comedian Katsura Sunshine will give a free standup act – while sitting down – of a centuries’ old Japanese tradition at 5:30 p.m. Friday, Nov. 4, in Daggy Hall’s Jones Theatre at Washington State University. The performance in English is open to the public.

WENATCHEE, Wash. – A four-week Spanish immersion class beginning Wednesday, June 15, is designed for school, state agency and law enforcement personnel, as well as those who want to increase their fluency in the Spanish language and cultures.