Washington State University alumnus and award-winning writer, director, producer, and educator Ted Tremper will discuss socio-political comedy when he returns virtually to WSU as the guest presenter for the Common Reading Program at 5 p.m. Oct. 27.

Visit the Common Reading website to register to attend the online presentation and to submit questions to Tremper.

Among the Seattle-area native’s many credits is his year-long assignment as field producer for The Daily Show with Trevor Noah, a weeknight Comedy Central TV series built around the host’s commentary on daily headlines.

Noah is the author of this year’s common reading book being used in dozens of freshman and other classes, Born a Crime: Stories from a South African Childhood.

“Ted is uniquely positioned to share his experiences with Mr. Noah as well as his own pathway from our university to the Daily Show and beyond,” said Karen Weathermon, director of the Common Reading Program, host and sponsor of the presentation that will be live-streamed using Zoom. “We welcome students and the community to join us for this discussion.”

It will be moderated by Weathermon and Buddy Levy, English professor.

Tremper now lives in Los Angeles. His credits include I Love You, America! with Sarah Silverman on Hulu, and the sequel to the film Borat. He has created several independently produced series that have been translated into three languages, garnered millions of views, and been featured in The New York Times, The Washington Post, and The Onion A/V Club. He is a member of the Director’s Guild of America, Writers Guild of America, and Woodworkers Guild of America.

Tremper is also a performer. At WSU, he was a member of the Nuthouse improvisational comedy troupe. For two years, he was part of Second City, the legendary sketch comedy theatre group headquartered in Chicago.

The Common Reading Program is in its fourteenth year. Topics from each year’s book are used in classes across the university to stimulate academic discussions between faculty and students. Born a Crime has sparked a rich series of guest presentations hosted by the program and its diverse partners on topics ranging from racial justice to identity, from family dynamics to the power of storytelling, and more. Nominations for next year’s book will open soon.

For more information and details on how to join the presentation, visit the calendar page on the Common Reading website. 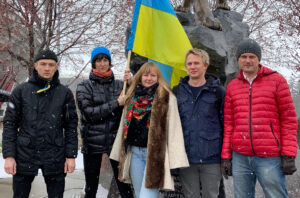 Members of WSU’s Ukrainian community are hosting a series of cultural events, starting this Saturday, April 16, while also raising funds and supplies for the defense of their homeland. 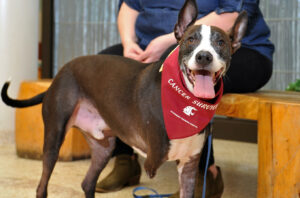 Support worthy causes such as cancer care for pets during #CougsGive

As part of #CougsGive, WSU veterinarians are hoping to raise enough money to purchase new equipment that will lead to safer treatments for animal patients with cancer.