Identified through a national search process, the finalists will visit WSU during the weeks of Nov. 27 and Dec. 4. 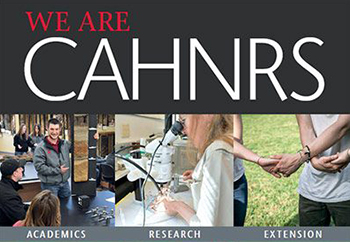 The WSU community is invited to attend sessions with each candidate in which they will outline their vision for CAHNRS, followed by a question-and-answer period. The sessions will be held at 9:10 a.m. on Nov. 27, Nov. 29, Dec. 4 and Dec. 6. Visit provost.wsu.edu/cahnrs for further details on the sessions, and more information about each candidate.

See below for short biographies of each finalist, listed in order of their respective visit dates:

Gregory Lardy is currently associate vice president for agricultural affairs at North Dakota State University. He earned his Ph.D. in animal science from the University of Nebraska, and has been a faculty member at NDSU since 1997, serving as department head in animal sciences since 2009. Lardy served as president of the American Society of Animal Science in 2013-14.

André-Denis Wright is currently an endowed professor and director of the School of Animal and Comparative Biomedical Sciences at the University of Arizona. Recently, he also assumed the lead role for the College of Agriculture and Life Sciences, four school directors and six department heads. Wright earned his Ph.D. in Zoology from the University of Guelph in Canada. Among his professional accreditations, he is a member of the American College of Gastroenterology, serves on several national boards and has served on review panels for the USDA, NSF and NASA.

Gary Thompson is currently associate dean for research and graduate education, and director of the Pennsylvania Agricultural Experiment Station in the Penn State College of Agricultural Sciences. He has served as lead of the Department of Biochemistry and Molecular Biology of Oklahoma State University and earned his Ph.D. from Purdue University. He is involved in several organizations that provide regional and national leadership for research at land-grant institutions, and has served as an advisor for numerous federal and international funding organizations. He is a fellow in the APLU-sponsored Food Systems Leadership Institute.

John Kirby is currently dean of the College of the Environment and Life Sciences, and director of the Agricultural Experiment Station and Cooperative Extension at the University of Rhode Island. He earned his Ph.D. in poultry science at Oregon State University. Kirby served previously as director of the Agricultural Experiment Station and executive dean for research and outreach at South Dakota State University, as well as director for the interdisciplinary program in cell and molecular biology, and director of the Functional Genomics and DNA Sequencing Facility at the University of Arkansas.