Blame it on the weather.

Rain and cool temperatures during March and April suppressed the early pollinating cycle of many trees in our region. Then came May, when stretches of warm, dry days “led to a rapid burst of pollen being released at once,” according to WSU colleague Andy McCubbin, a molecular plant biologist who specializes in pollen. Generally speaking, cool, damp conditions are good for plant growth but pollen isn’t released until the weather warms up and the rain lets up, he said. 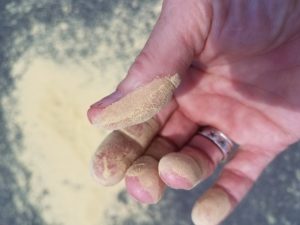 Less rainfall during those two previous years prompted early-pollinating trees to release on schedule, meaning that pollen levels spread out more gradually from March through May. But this spring was another story, with trees pollinating almost simultaneously during warm stretches in May and early June.

Tree pollen counts surged into the high range for several days beginning on May 23, when the peak temperature reached 82 degrees and again May 30, when the mercury climbed to 90.

We’ve also had plenty of breezy days, intensifying the amount of airborne pollen levels. And talk about aerodynamic — wind-blown pollens can be carried as far as 500 miles from their original source, according to the Maryland-based Asthma and Allergy Foundation of America.

This past Saturday, the high hit 83 degrees with winds gusting to 19 mph, sending more pollen on its merry way.

The good news for allergy sufferers is that the trees will soon stop releasing their pollen. The bad news? The grass pollination season is unfolding, which means one pollen season is overlapping another.