LIND, Wash. – The day Mount St. Helens erupted, Gladie Nagamitsu vividly remembers when noon turned to midnight and the sky started raining down on the tiny farming town of Lind, Wash., where she lives.

But her most striking memory is of plunging a yardstick into the ash-blanketed ground the next afternoon.

“It looked like dirty snow that would never, ever melt. It was horrible. We thought we’d never see green grass again,” said Nagamitsu, who worked at Washington State University’s Dryland Research Station where she gathered data for a small weather station.

As the 37 year anniversary of the mountain’s eruption approaches this week, Nagamitsu, now 89, still wonders why so much of the volcano’s ash landed on her town.

Why did Lind, located 200 miles downwind from the eruption — get 6 inches of ash when other communities closer to the explosion got less? Though the city of Yakima is 100 miles from the volcano and positioned directly in the drifting plume’s path, half as much ash landed there than in the Lind area, according to analyses done by the U.S. Geological Service. Ephrata and Othello, also closer to the eruption, got 3 inches as well.

“All these years later, when I tell people who weren’t in Lind that we got six inches of ash, they can hardly believe it,” said Nagamitsu.

Intrigued scientists spent the next few years seeking causes of the drama that fell from the sky.  This is what they learned:

When Mount St. Helens erupted May 18, 1980, ash plumes shot as high as 15 miles into the sky. An upper-level wind then carried clouds of volcanic ash east-northeastward across central and eastern Washington at a speed of about 50 mph, said meteorologist Nic Loyd of WSU’s AgWeatherNet. The thickest ash drop occurred in a 60-mile swath downwind of the eruption, he said.

But a mysterious, second heavy dump ensued much farther away near Lind and Ritzville, according to the USGS.

“At that distance, we would have expected the ash cloud to be widening its scope and dropping less ash, not more,” said Candis Claiborn, professor for WSU’s Laboratory for Atmospheric Research in the  Department of Civil and Environmental Engineering. 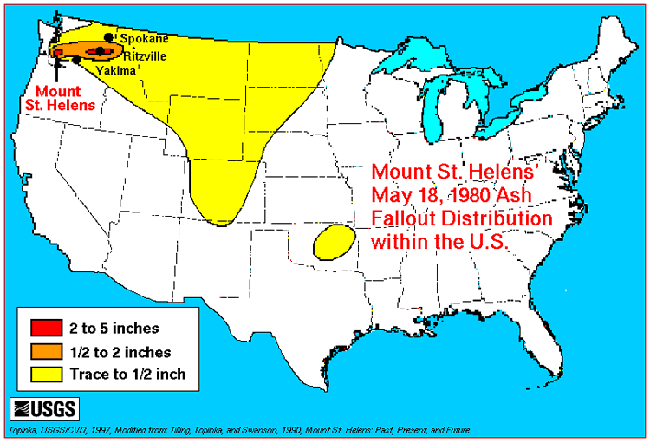 Clumps in a cloud

In 1982, two scientists from the University of Rhode Island dubbed this second hard-hit area “the Ritzville bulge,” which, on a map, resembles a slim sausage. Their study, published in the Journal of Geophysical Research, theorizes that the heavier fallout was caused by localized clumping of fine ash particles inside a surging cloud.

Within that ash cloud, water vapor condensation or electrostatic forces likely caused the very small particles to aggregate. The resulting clumps were heavier so they tumbled to earth.

“Had the ash fallen as individual particles, they would have been dispersed and deposited over a much larger area of the western and central U.S.” scientists concluded. Instead, “premature fallout” occurred, they stated.

The hypothesis that the aggregation of ash particles caused them to fall from the cloud early is a plausible explanation, said Claiborn, who analyzed the study. “Wind velocity alone doesn’t explain the thick ash deposits left in the Lind and Ritzville vicinity. It’s clear that other forces were at work.”

Rise from the ashes

After the eruption, Lind residents spent months cleaning ash from rooftops, roads and lawns. They used everything from back hoes, grain trucks and front-end loaders to wheelbarrows and snow shovels, Nagamitsu recalled.

Tons of ash were unloaded into an old quarry on the edge of town and topped with dirt. To Nagamitsu’s delight, lush green grass emerged.