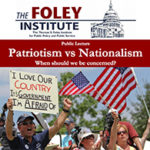 “Patriotism vs. Nationalism: When should we be concerned?” a public lecture by Carol Swain, professor of political science and law at Vanderbilt University, will be hosted by the Foley Institute, 4:30 p.m. Tuesday, April 18, in CUE 203.

Swain will discuss the causes and manifestations of nationalism in the context of the new administration.

Swain is the author of the “Black Faces, Black Interests: The Representation of African Americans in Congress,” and former television host. She is the author or editor of six books. Her scholarly work has been cited by two associate justices of the U.S. Supreme Court. Her fields are race relations, immigration, representation, evangelical politics, and the U.S. Constitution. Her views on race and Islam have attracted national attention in the media. Swain will retire from Vanderbilt in August, as noted in the Tennessean newspaper.