SPOKANE, Wash. – Bad weather is hitting parts of the country as millions of people are driving or flying during the Thanksgiving holiday.

Here in the Inland Northwest, we’re sitting pretty. Sure, we’ve got clouds and intermittent rainfall, but no freezing rain, heavy snow or glare ice on highways.

What better time to be thankful for our region’s weather? Let us count the ways.

First, the big ones. Hurricanes don’t strike and tornadoes rarely. Even severe thunderstorms are scarce. 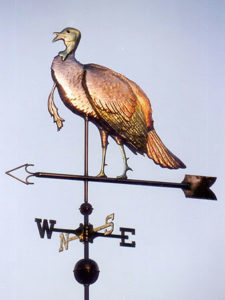 Unlike much of the U.S., a key ingredient missing here is humidity, or the concentration of water vapor in the air. High humidity makes the air feel steamy and hotter than it is and also makes it harder for our bodies to cool down. It also contributes to the formation of thunderstorms, which in turn can spawn tornadoes.

Another summertime plus: Warm, sunshine-filled days that give way to cool nighttime temperatures.

If you’ve ever slept someplace like Texas, Georgia or Virginia during the month of August, you know how stifling hot it can be at midnight. But that’s rarely the case in the Inland Northwest, where a temperature drop from day to night makes sleeping more comfortable.

As for rainfall, we see far less than the folks on Washington’s west side. Where Seattle gets an average of 38 inches of precipitation annually, the Spokane area gets 16 inches and Yakima, Wash., receives only 8. Why so little? The Cascade Range, which bisects the state from north to south, does a good job of keeping rain-producing weather systems from reaching the state’s eastern half.

Finally, we enjoy relatively benign winters as well. While the coldest temperature recorded in Spokane is minus 30 degrees on Jan. 16, 1888, that was nearly 129 years ago when Grover Cleveland was president. These days, temperatures seldom drop below zero. The most recent was on Feb. 6, 2014, when the low hit minus 5.

Also, despite our higher latitude, we don’t get many snowstorms. The last time a blizzard struck was during a record-breaking January in 1950 when nearly five feet of snow fell. The necessary ingredients – winds of at least 35 mph, cold temperatures and heavy snowfall – generally don’t hold together three hours or longer to produce blizzards in this area.

On Thanksgiving, if you make a toast with a delicious glass of wine or craft beer made in Washington state, you might give thanks to our weather.