The event, held yesterday afternoon in the CUB auditorium, drew a large crowd of students and community members. Put on by WSU’s Thomas S. Foley Institute for Public Policy and Public Service, the panel addressed the growing outrage over police use of force against minority members.

Even the two presidential candidates are daring to speak out on the issue, said institute director Cornell Clayton in his introductory remarks.

At the same time, police are feeling targeted by social media, a 24-hour news cycle and recently in Dallas, Texas, retaliatory violence, he said.

“Race is a major issue in policing,” Boyd told the audience. Consequently, unarmed people of color are being killed in record numbers, he said. 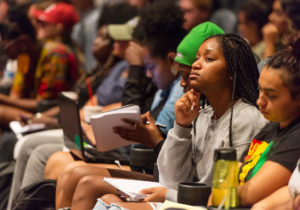 Tacoma’s captain Taylor stressed the need for more “values-based policing,” an approach implemented by his department in 2010 that promotes greater accountability and closer ties between officers and citizens.

The police “are the citizens, and the citizens are the police,” said Taylor, citing the words of Sir Robert Peel who, nearly two centuries ago, founded London’s police force on a framework of nine guiding principles.

“The ability of the police to perform their duties is dependent upon public approval of police actions,” was one of those principles.

What worked in London back in 1829 could be effective in modern-day America as a way to defuse conflicts instead of inflame them, panel members agreed.