PULLMAN, Wash. – The Netherlands’ well known, relaxed approach to vice has lately tightened up as local governments close or move marijuana coffee shops and brothels, arguing that they breed nuisance and more sinister levels of criminality.

These changes and how they feed into the larger international debate about normalization vs. criminalization of “vice crimes” were some of the topics explored by eight Washington State University criminal justice majors accompanied by professor Melanie-Angela Neuilly on a recent study abroad week in the Netherlands. 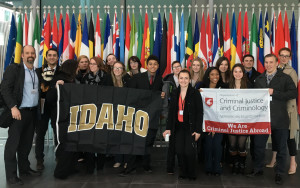 The purpose of the trip was to give students an up-close examination of the Dutch approach to criminal justice and insight into international policing and court organizations.

In Amsterdam, the students took a law enforcement guided tour of the city’s red light district and heard talks from the founder of a sex worker union, the proprietor of a cannabis information center and Dutch scholars on the country’s approach to regulating drugs, criminology and the sex trade and human trafficking.

The group also visited the U.S. consulate to hear about the security concerns of U.S. embassies and missions abroad.

The students will make oral presentations of their research and results on April 18.