SPOKANE, Wash. – It was a blustery March in our region, with gusts reaching 31 mph on four days and mean daily wind speeds exceeding 10 mph on 13 days.

Speaking of wind, hold on to your hats; this column is about air turbulence. If you do much flying, you’ve probably encountered it as bumps, jolts and sloshed drinks on tray tables. Simply put, air turbulence is the unruly disturbance in air flow. Unlike the windy weather we experienced in March, this phenomenon isn’t as predictable.

And while there are many different types, ranging from light to severe, we’ll first examine one that literally comes from the blue: clear air turbulence.

Known in the aviation industry as CAT, it occurs at high altitudes in otherwise calm, blue skies and is caused when a mass of air moving at a certain speed meets another air mass moving at a different speed. The culprit behind it is variation in the jet stream, a river of air moving high in the earth’s atmosphere. 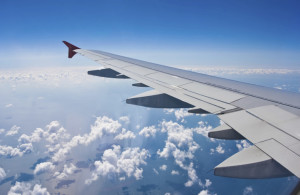 Clear air turbulence offers no visual clues such as clouds and can’t be detected by conventional radar, making it challenging to predict. Because there are no clouds, no moisture is present to reveal movement in the air.

Fortunately, commercial aircraft are structurally designed to withstand even severe CAT. And systems to detect and respond to agitated air are improving, including technology that automatically corrects the plane to offset rapid lateral gusts of wind.

But the main type of air turbulence is wind shear. Because it can occur close to the ground or high in the atmosphere, it can jounce sailboats as well as planes. Caused by a major change in wind speed or direction over a short distance, it’s typically brought on by thunderstorms, temperature inversions, a shift in the jet stream and even by large wildfires.

When planes encounter wind shear close to the ground, they have less room to maneuver out of it. So if you’ve ever had a pilot climb away from the airport, rather than land, the problem might have been wind shear. Though you might have been irked by a time-consuming diversion, be grateful. Your pilot may have averted an accident.

While severe turbulence can instill jitters among the most frequent of fliers, keep in mind that crashes related to this kind of rogue air are rare. Even so, despite the best efforts of meteorologists and aviation specialists, turbulence sometimes happens. That said, remember that there’s a low-tech instrument at your fingertips to help ensure your safety each time you fly.

A big reason passengers are belted in is to prevent injuries that can occur during severe turbulence. After all, if a glass of orange juice can get hurled into the air, so can you.

Weathercatch is a bimonthly column that appears in The Spokesman Review.