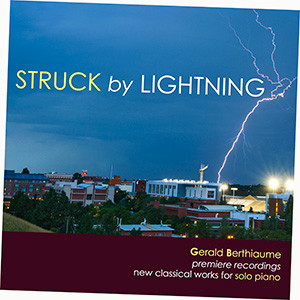 Berthiaume is a founding fellow of the Music Teachers National Association, was selected to present the 2015 WSU Distinguished Faculty Address and was awarded the Dean’s Distinguished Achievement Award from the WSU College of Liberal Arts. He served for eight years as director of the School of Music.

He has lectured and performed as soloist, accompanist and chamber musician in the United States, Germany, Saudi Arabia, Bahrain and Ukraine. He won the U.S. Information Agency Artistic Ambassador Competition and accompanied William Walker of the Metropolitan Opera and James King of the Vienna State Opera.

His recordings include the definitive CD of the works of composer Robert Starer and numerous solo and chamber music performances available on several recording labels. “Struck by Lightning” is available on iTunes, Pandora and other online outlets. Compact discs are available from the WSU School of Music.