PULLMAN, Wash. – A group of Washington State University engineering students is shooting for the stars, building a rocket that will launch in southern Utah this summer in an international competition.

“Building rockets is an excellent way to not only to learn to design, build and fly, but also to meet people in your major and to network,” said team member Paul Flerchinger. 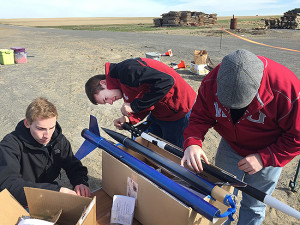 He is part of WSU’s student chapter of the American Institute of Aeronautics and Astronautics. The group is preparing to participate for the first time in the Intercollegiate Rocket Engineering Competition (IREC), a five-day event that will include student teams from the U.S. and around the world.

The competition requires students to launch rockets to 10,000 feet and then safely recover them. The rockets must carry a 10-pound payload.

“Not many people can say they built a rocket that flies two miles into the air,” said Flerchinger, a junior in mechanical engineering and the club’s president.

The WSU team, which includes 21 students, has been working on the project since last semester. 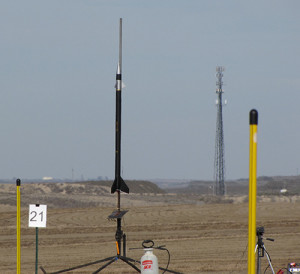 “One of our ideas for the payload is to attach a remote control airplane to our rocket,” said Flerchinger. “At the rocket’s peak, the plane will dismount and glide down to the ground.”

The competition is providing a valuable chance to apply the learning from their engineering and math classes, from fluids to thermodynamics to statistics, he said. In fluid dynamics, for instance, he and his classmates learned how drag affects rockets in flight and used equations to determine thrust needed for a successful launch.

Some of the students are also enrolled in a rocket design class.

“We are taking everything we learned throughout our schooling and applying it,’’ Flerchinger said.

The competition also is helping the students build a successful resume, he said: “It shows employers you have other interests and are excited about working in your major.”