By Tim Marsh, for WSU News

Q: Do you have mixed emotions about who to support in this game?

A: No one here (in Fort Collins, Colo.) is in any doubt as to where I went to college or where my heart lies. In fact, when my friends and colleagues at CSU learn about the WSU flags on ESPN GameDay, Cougar alumni activities in the Denver area and the many Cougar connections I have within CSU, they all ask, “How can we get what you guys have?” 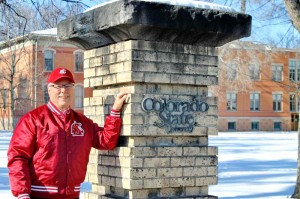 I’ve done my best to help the CSU Rams promote similar school spirit. The Rams are a great group but they don’t have the kind of alumni support that WSU does.

Q: Give us a quick review of your WSU and Pullman background.

A: My family moved from Iowa to Pullman in 1960 when my dad accepted a teaching position at WSU in agricultural engineering. He taught at WSU 34 years. There were four kids in my family and all four earned degrees at WSU.

My grade school was Edison; there are apartment buildings on that site now. In 1964 I was in the first class to attend the original Lincoln Junior High – since torn down, rebuilt and now Lincoln Middle School. I graduated from Pullman High School, now the Gladish community center, in 1968.

Q: What are WSU and CSU similarities and differences?

A: They’re both land-grant universities and both are seen as the “little guys” in the state, although CSU isn’t much smaller than the University of Colorado (CU).

After 33 years in higher education, I can tell anyone that land-grant universities have a different attitude than other schools. They are more approachable, more user-friendly and more dedicated to serving all the people in their home state then the “big” school in the state.

WSU and CSU are similar in terms of their research and instruction and both have colleges of veterinary medicine. Faculty tend to move within land-grant universities. There are many Cougars on faculty here and more than 1,000 WSU grads in Colorado.

The towns and their settings are more different than the universities. CSU is only 60 miles north of Denver and is part of the state’s population center.

Fort Collins is a significantly bigger town than Pullman and has done a better job of rejuvenating its historic downtown. I’d love to see Pullman work on making the downtown area a destination spot; all the potential is there, it just needs some funding and consistent effort.

Q: Is the CSU-CU relationship similar to the rivalry between WSU and the University of Washington?

A: There is a good rivalry, but it’s less intense. Since the schools are in two different football conferences, the annual game simply doesn’t count for much other than a win or loss and in-state bragging rights for the year. There’s plenty of spirit around the CSU-CU game but it’s not on the same scale as the Apple Cup.

Q: Tell us about your WSU education and career.

A: I earned a bachelor’s degree in broadcasting in 1973 and returned for a master’s in adult education completed in 1979. I was the radio and TV specialist for the WSU College of Agriculture and Life Sciences 1980-85 and had a great time working with radio and TV stations across the state.

I moved to Texas A&M as coordinator for a video and radio production unit in the ag college. I produced most of their satellite teleconferences, which generated an interest in distance education. In 1998 I joined CSU as the first director of online development to get courses and degrees online.

Q: How have you been involved in the WSU Alumni Association?

A: When I was at A&M, I got some Cougar activities going in College Station. I became WSU alumni chapter president in Colorado in 1998; over the next six years we rebuilt an active chapter centered in the Denver area. I then held a succession of offices in the WSU Alumni Association, including president 2007-2008.

Q: How will you be attired for the New Mexico Bowl; crimson and gray or Colorado State’s green and gold?

A: My wife JoAnn (a WSU alumna) and I are all Coug, all crimson and gray, all the time!