YAKIMA, Wash. – 20/20 vision isn’t the same thing as “perfect vision.” Just ask one of the millions of people who literally can’t stand watching a 3D movie.

In fact, said Ben Winters, a developmental optometrist and owner of Washington Vision Therapy Center in Yakima, 3D movies are a useful screening tool in diagnosing vision problems that are sometimes hidden in plain sight.

If someone cannot see the three dimensions, or gets a headache or feels dizzy or nauseous while watching a 3D movie, Winters said, that’s a clue that the person’s eyes might not be working together or focusing efficiently. Not being able to watch a 3D movie isn’t necessarily life altering, but having an undiagnosed vision problem can be.

Not detected in screenings

The American Optometric Association estimates that one in four children has an impairment related to binocular vision, but fewer than one percent are getting treatment. 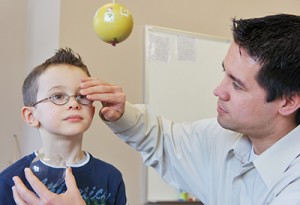 Significantly, tracking issues and inefficient focusing do not show up during simple vision screenings. Many children can read an eye chart just fine but are overwhelmed when confronted with pages of small print and a lengthy reading assignment.

While glasses typically treat vision problems related to the shape of the eye, vision therapy is more like physical therapy for the eyes and brain, with a goal of strengthening the muscles around the eye to improve alignment and focus.

Not a typical business

Winters was in optometry school when he first heard about vision therapy and its potential to help people with developmental vision problems. He was inspired by the lecture and immediately knew it was something he wanted to pursue. But, with an undergraduate degree in business, he also knew it wouldn’t be easy.

“I was always told to never get into business where you need to educate the public so that they can understand your product or service,” Winters said. Another lesson was that if you want to get people in the door, offer an introductory special or a range of price points. A vision therapy practice failed on both counts.

Vision therapy can take from two months to a year or more, depending on the severity of the problem. Adding to the difficulties, insurance companies have refused to cover vision therapy or have only covered a small portion of the cost.

Though vision therapy has been around for nearly 70 years, practices are still relatively rare and models for running a successful, sustainable practice in a mid-size community are even more rare.

Most practices are in or near large metropolitan areas and many practices focus on traditional optometry services and offer vision therapy as a sideline.

“To my knowledge, no one had ever successfully started a specialized vision therapy practice in a city as small as Yakima,” Winters said.

Fully aware of the challenges, Winters began meeting with Linda Johnson, a certified business advisor with the Washington Small Business Development Center (SBDC) while he was still providing traditional optometry services at a superstore. 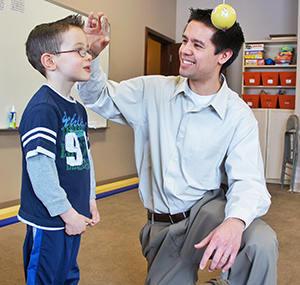 Johnson is one of 26 business advisors and three international trade specialists working in SBDC centers across the state to provide no-cost advising to small business owners who want to start, grow or transition their business. The SBDC is supported by Washington State University, the U.S. Small Business Administration and other institutions of higher education and economic development.

“What Linda did that was so powerful,” he said, “is that she had me write that vision down, expand the vision and then make sure I was taking care of all the details that would make that vision a reality.”

Winters and Johnson spent hours on his business plan, using orthodontia practice as a model and talking about everything from personal values to company valuation. Together they worked on billing procedures, office procedures, staffing and securing a loan for commercial office space.

While Winters’ business plan focused on private pay patients, he also decided to give away 10 percent of his services to those who could not pay and create a nonprofit to help with education, advocacy and fundraising for vision therapy services.

With Johnson’s help, he created an advisory board of medical practitioners and business entrepreneurs to help guide the growth of his practice.

His practice did grow. By 2011 he left the superstore and by 2012 he had hired seven employees, including three full-time vision therapists.

Winters had set a goal of about 120 active clients; by mid-2013 his caseload had more than 80 clients, well ahead of his projected growth. But as his practice grew, so did his realization that a private pay business model – even with a significant pro bono caseload – didn’t line up with the kind of practice he wanted to create.

“It changed for me,” Winters said. “I can’t tell you how many parents I’ve had in my office, in tears, because they couldn’t afford treatment for their child,” he said.

And he knew the difference treatment could make.

In a caseload filled with stories of young people who have persevered against long odds, Tyler Reese stands out, perhaps because he was one of Winters’ earliest patients.

One of many successes

Reese was born with a right eye that was turned in so severely it was hard to see the iris. His turned eye wreaked havoc on his peripheral vision, depth perception and self-confidence.

People stared, or looked away. Some even asked where he was looking. He endured three surgeries to correct the strabismus, but he still had no depth perception and was embarrassed by his appearance.

In 2010, when Reese was 17 years old, he heard about vision therapy and decided he wanted to give it a try. Over 10 months of therapy he developed the ability to control his eye movements. He appeared “normal” and was able to see the world in three dimensions; 3D movies were a particular treat.

“It was outstanding,” he said. “I was like a kid in a toy store, seeing different things all around me. I had never experienced anything like that.”

Reese has set his sights on becoming a developmental optometrist.

If this is a proven treatment, Winters said, then insurance should pay. That’s also the stance of the American Optometric Association (AOA), which has been compiling a growing library of research on the effectiveness of vision therapy for some vision problems, including the 2008 “gold standard” double-blind study funded by the National Eye Institute of the National Institutes of Health.

With the possibility of insurance billing on the horizon, Winters went back to Johnson and to his business plan.

“Help me think this through,” he said. Private pay billing meant clients typically paid in advance, but insurance billing meant he’d have to provide the services first and then wait for payment. Working with insurance would also require new record keeping and new billing procedures.

Winters worked with Johnson to create new business systems for the new business model, not just for his own practice but for others too.

“This would be the same benefits patients use for physical therapy and occupational therapy,” Winters said. “This is big for us. People in my field have been working on this for years.”

Winters is also working on getting approval for Medicaid reimbursements.

A world of possibilities

With better insurance coverage, he said, it should be possible for all children to get the treatment they need: “Good functional vision is just too important to life.”

As Reese discovered, being able to enjoy a 3D movie is a treat but being able to see in three dimensions opens up a world of possibilities.

For more information about the Washington Vision Therapy Center, go to http://www.wavtc.com/.

For more information about the Washington SBDC, go to http://www.wsbdc.org. To search for an advisor in your area, enter your zip code in the search bar near the top of the page.