PULLMAN, Wash. – To hear Brad Jaeckel talk about the 2,000 pumpkins soon to be sold at Washington State University’s organic farm, one might think he’s out of his gourd.

Blue and red ones will be ripe for picking, said Jaeckel, and lots of white ones, too.

A visit to the farm, however, proves that his noggin is firmly in place. There, beneath a sprawling carpet of forest-green leaves, peer whimsical-colored pumpkins: Slate-blue, creamy white, red-orange, green veined with yellow. And, of course, good old jack-o-lantern orange.

These will be ready for visitors to pick and haul away at the farm’s Fall Harvest Celebration this Saturday, 10 a.m.-4 p.m., co-sponsored by WSU’s Tukey Horticultural Orchard.

When the organic farm started holding the event nine years ago, the u-pick pumpkin patch offered one variety of autumn’s prime crop, said Jaeckel, who manages the farm. This year, seven varieties yield a riot of colors and sizes. Even their textures vary, with some smooth, others wrinkled and some coarse.

“People are seeing how versatile they are and how their usefulness goes beyond a Halloween decoration,” he said.

This awareness is part of a national trend: “Pumpkin is the new bacon,” wrote Felix Salmon in a New York magazine article published last year about the orbs’ burgeoning popularity. “When you think pumpkin, you think of something farm-grown and wholesome.”

And what you think is what you’ll get when the organic farm sells its bounty to the masses. As a food source, pumpkins are loaded with potassium, calcium and vitamins A and C. They’re also high in fiber and low in calories, according to the U.S. Department of Agriculture.

Pumpkin tastes good, whether cooked, roasted, pureed, mashed or stuffed. What’s more, these multi-sized creatures even come in their own lidded pot.

Any way you slice them

Now that pumpkins have attained this late-harvest prestige, they’re showing up in far more dishes than pie, said Jamie Callison, executive chef and instructor with WSU’s School of Hospitality Business Management. Soups, ravioli, cheesecake, breads and cookies – “this versatile squash now comes in so many varieties, each with its own color, texture and flavor. There’s not much you can’t do with them,” he said. 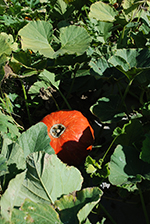 A simple and delicious way to prepare the thinner-skinned pumpkins is to slice them into quarters, drizzle with olive oil, roast them in the oven until soft and caramelized and add salt and pepper, said Callison – a recent cookbook author known for taking seasonal foods from the Palouse and turning them into grand cuisine.

Rich and savory, “these are big, meaty slices that can be eaten like steak,” he said. (Callison will be selling and autographing his cookbook at the harvest fair. Go to http://crimsonspoon.wsu.edu).

Back at the pumpkin patch, Jaeckel high-stepped the vine-tangled orbs that he and his crew planted last May inside a greenhouse. No orange thumb was required to grow them, he explained. Once transplanted to the field, the small plants erupted into sprawling ground cover that needed little weeding.

Afterward, he and his fellow growers pretty much stood back and watched as one globe after another emerged from a thicket of green.

“Over there; that’s a big one,” said Jaeckel, pointing to the broad-faced jack-o-lantern variety known as Howden. “I’ll bet this one weighs 30 pounds, easy,” he said, adding that student volunteers will be on hand at the harvest fair to lug pumpkins to cars after they’ve been purchased.

Some pumpkins, however, will be light enough to carry with one hand. Weighing five pounds or less, baby pam and winter luxury contain a sweet flesh that’s widely used in pies and other desserts. As Halloween décor, they’re great for painting.

And then there’s the bluish-gray Jarrahdale native to Australia, the ghostly Valenciano and the brilliant red-orange Rouge Vif d’Etampes that resembles Cinderella’s carriage.

Eye-catching, yet rich and flavorful, these varieties allow customers to have their jack-o-lanterns and eat them too. They can also pick fruit at the Tukey orchard and enjoy wood-fired pizza slices and fresh-pressed cider.

The orchard and farm are located on a gravel road off Terre View Drive near Airport Road.

Carve your jack-o-lantern with a Cougar head logo. Get stencil from Washington State Magazine at http://wsm.wsu.edu/s/we.php?id=290#.Uk2RN5Hn-fB.