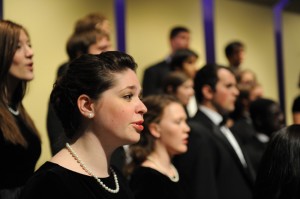 PULLMAN, Wash. – The Washington State University School of Music will present the 28th Annual Vocal Extravaganza at 8 p.m. Friday, Oct. 11, in Bryan Hall Theatre. A part of the celebration of Dad’s Weekend events, the performance will showcase all of the vocal ensembles in the School of Music.

The concert will open with the Madrigal/Chamber Singers, conducted by Lori J Wiest, Ph.D., professor of music. The 18-member ensemble, consisting of undergraduate and graduate students and WSU staff from Russia, China, Hawaii, Connecticut, Wisconsin, Oregon, Idaho, and Washington, will be performing madrigals and sacred selections of a cappella music while wearing costumes reminiscent of the Renaissance period of the Sixteenth Century.

The University Singers, directed by Dean Luethi, will be performing four selections on the evening’s program. Vincent Persichetti uses E.E. Cummings text for the song “Sam Was a Man.” Mark Hayes’ arrangement of the traditional “Home on the Range” is an elegant treatment of this beloved folk melody. “If Love Should Count You Worthy” is a beautiful setting of a text by James Muhlolland. “I’m Goin’ Home On a Cloud” is a traditional African-American Spiritual arranged by Peter J. Durow for chorus, piano and clarinet.

The WSU Concert Choir, an ensemble of 48 singers conducted by Wiest, will open with a performance of “Ave Verum Corpus” by Canadian composer Stephanie Martin followed by “Entarisi Ala Benziyor,” a Turkish folksong adapted by choir by Muammer Sun.“There Will Come Soft Rains” is a lovely and epic setting of a Sara Teasdale poem by Swiss composer and jazz pianist Ivo Antognini, who has also composed music for television and films. Concluding their performance will be “Stay in Time” for choir, piano and woodblocks with music and lyrics by Robert S. Cohen.

Opera Workshop will be performing portions of their program of one-act operas and scenes to be fully presented later on 8 p.m. Thursday, Nov. 14, in Bryan Hall Theatre.  Directed by Julie Anne Wieck and accompanied by Karen Savage, the program will consist of representations from American opera composed in the 1950s.

VoJazz, under the direction of Dean Luethi, will begin their performance with Kerry Marsh’s arrangement of Duran Duran tune “Ordinary World”.  The tender and heartbreaking song “Was I In Love Alone,”  arranged by Washington native Dave Barduhn and presented as an alto solo feature. VoJazz’s final selection “Spooky” is a very contemporary treatment of this tune popularized by Dusty Springfield and arranged here by Kerry Marsh.

Tickets for the event will be available on  10 a.m.-2 p.m. Oct. 9-11, in the lobby of Kimbrough Music Building, and in Bryan Hall beginning at 6 p.m. on the night of the performance. Tickets are $10 for adults, $5 for senior citizens and students with ID, and free for children 12 and under.  All proceeds go directly to the student ensembles for music, performances/productions, and tours.